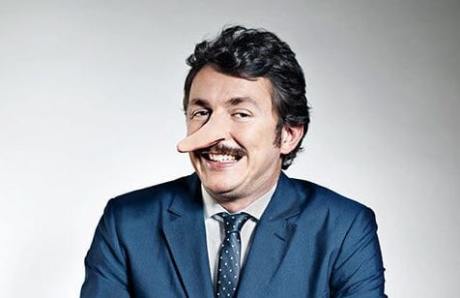 Between self-righteous insistence on lockdowns and wholeheartedly jumping into throngs of protestors in the streets, it’s as if the “woke” crowd is eager to flaunt its hypocrisy. However, a greater disgrace belongs to public health experts who have compromised and politicized their advice since the George Floyd murder in Minneapolis more than two weeks ago. Their apparent compulsion to virtue signal has overwhelmed their mindfulness as objective scientists.

Here is Tyler Cowen on the preposterous messaging from some of these experts. I’m fairly certain the quote in the first paragraph is from the esteemed Carl T. Bergstrom:

“I am not looking to attack or make trouble for any individual person here, so no link or name, but this is from a leading figure in biology and also a regular commenter on epidemiology: ‘As a citizen, I wholeheartedly support the protests nonetheless.’

My worries run deep. Should the original lockdown recommendations have been asterisked with a ‘this is my lesser, non-citizen self speaking’ disclaimer? Should those who broke the earlier lockdowns, to save their jobs or visit their relatives, or go to their churches, or they wanted to see their dying grandma but couldn’t…have been able to cite their role as ‘citizens’ as good reason for opposing the recommendations of the ‘scientists’? Does the author have much scientific expertise in how likely these protests are to prove successful? Does typing the word ‘c-i-t-i-z-e-n’ relieve one of the burden of estimating how much public health credibility will be lost if/when we are told that another lockdown is needed to forestall a really quite possible second wave? Does the author have a deep understanding of the actual literature on the ‘science/citizen’ distinction, value freedom in science, the normative role of the advisor, and so on? Does the implicit portrait painted by that tweet imply a radically desiccated, and indeed segregated role of the notions of ‘scientist’ and ‘citizen’? Would you trust a scientist like that for advice? Should you? And shouldn’t he endorse the protests ‘2/3 heartedly’ or so, rather than ‘wholeheartedly’? Isn’t that the mood affiliation talking?

On May 20th, the same source called a Trump plan for rapid reopening (churches too, and much more) ‘extraordinarily dangerous’ — was that the scientist or the citizen talking? And were we told which at the time? Andreas’s comments at that above link are exactly on the mark, especially the point that the fragile consensus for the acceptability of lockdown will be difficult to recreate ever again. ….

We really very drastically need to raise the quality and credibility of the advice given here.”

David Bernstein identifies the same charlatanism in the claims of health experts (e.g, the likes of Jennifer Nuzzo of Johns Hopkins), who insist that protests have value that outweighs the cost of any coronavirus infections they might cause:

“The public health folks who are comparing the negative Covid-related health effects of the rallies to the health effects of racism and police violence are committing a fundamental methodological error. On the one side, there is a real public health problem of coronavirus, and we know, based on what the experts have been telling us since March, that large public gatherings will likely kill a large but indeterminate number of people.

On the other side, racism harms people’s well-being, and state violence directly harms their health. However, and this is key, no one has any idea what overall effect the protests (and any attendant violence) will have on racism and state violence, even whether it will be positive or negative.

These experts have not made any effort of “model” the effects of racism on public health, to say nothing of the presumed effectiveness of protests in mitigating those effects. They are engaged in political advocacy. In fact, however, I quite agree that certain reforms to the criminal justice system will have long-term benefits to society, but all prior advice from these experts suggests the protests will have severe health costs. Cowen links to virologist Trevor Bedford’s tweets offering a range of estimates for the ultimate number of coronavirus deaths that will result from the protests: 200-1,100.  While acknowledging the tragic consequences of racism, Bedford notes that most of these extra deaths will be “disproportionately among black individuals”.

Moreover, the crazier ideas holding sway with some protesters (e.g., ban police, reparation payments), and the crazy actions taken by radical elements (arson, looting, murder) might well result in racial backlash. Worse yet, dismantling police departments or even reduced police budgets could reverse declines in violent crime we’ve witnessed over the past 20 years, with most of the cost falling squarely on impoverished black communities.

Some rightly ask why people have been denied their right to grieve and bury their own loved ones while throngs are permitted to attend George Floyd’s funeral, along with the protests on crowded streets: 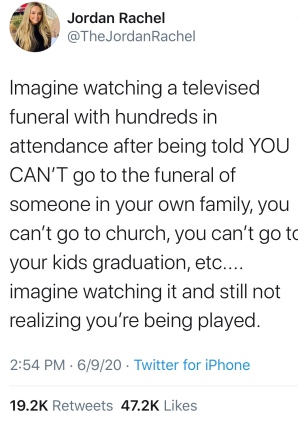 Is it any surprise that democrats now claim Trump rallies would be coronavirus hazards, even after supporting the protesters who flocked to the streets? The Trump rallies might well lead to more infections. If the rallies take place, I’d be glad to see them kept outdoors with socially-distanced attendees wearing masks. But anyone defending the marches and protests of the past two weeks while condemning future Trump rallies on the grounds of coronavirus risk is engaging in rank hypocrisy. But that’s just one example: it’s just as outrageous to agitate for lockdowns that inflict the greatest harm on the poor, and cost lives in myriad ways, while carping about economic injustice.