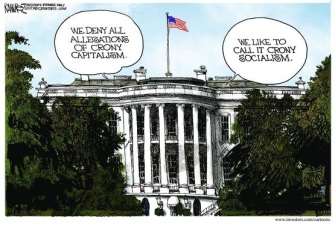 Some perceive the government as an ideal agent of redistribution, but they fail to apprehend the many ways in which government policy undermines equality. Scott Sumner and Kevin Erdmann have written an excellent essay on this point entitled “Here’s What’s Driving Inequality” at National Review. They focus on three areas of government action with the unavoidable side-effect of upward redistribution: housing policy (at all levels of government), regulation, and excessive protections for intellectual property.

Sumner and Erdmann briefly cover Thomas Piketty’s controversial view that wealth becomes increasingly concentrated under conditions of secular stagnation. However, they note that over the past few decades:

Housing policy has driven rents upward in myriad ways. For example, restrictive zoning laws, environmental regulation of new building and regulation of bank lending have all made homeownership less feasible and renting more expensive. If you’re already in your own home, you’re safe! If not, welcome to the have-nots! Here’s a story on government insurance programs that offer massive subsidies to wealthy homeowners. All these redistributional effects are compounded by a tax code that has inflated housing prices through the home mortgage interest deduction, and at the same time inflated rents via the incidence of higher taxes on rental income and real estate capital gains.

Regulation of private business activity is often viewed naively as a necessary, protective function of government, but regulation acts in perverse ways:

“Unfortunately, many government regulations tend to favor larger firms. In recent years we have seen the passage of some extremely complex regulations involving thousands of pages of rules, such as Sarbanes-Oxley, Dodd-Frank, and the Affordable Care Act. The Food and Drug Administration, the Department of Defense, and the public health-care complex tend to create opportunities for uber-firms within industries, which act as clearinghouses for public contracts and regulatory demands.”

Large firms tend to pay higher wages and salaries than small firms. By favoring large firms, regulation in turn favors their relatively high-income workers. In addition, regulation such as occupational licensing, labor regulations and local wage controls damage the health and growth potential of small firms and the mobility of individuals at the bottom of the economic ladder.

Finally, Sumner and Erdmann discuss the often bizarre extension of intellectual-property (IP) rights and the way it favors large firms:

“Copyright protections once lasted for 14 years, applied only to maps and books, and could be renewed once if the author was still alive. Now they’ve been extended to many other products, extend for 50 years after the death of the author, and last for at least 95 years for corporations. These extensions are widely seen as reflecting the lobbying power of companies such as Disney. In the high-tech sector, patents are often granted for seemingly minor and obvious innovations.“

Sacred Cow Chips featured a piece on IP several months ago called “Is The Patent a Perversion?” The Libertarian view of IP is skeptical, to say the least, and favors limited protection at most. In that post, I quoted Jeffrey Tucker of the Beautiful Anarchy blog:

“Through intellectual property laws, the state literally assigned ownership to ideas that are the source of innovation, thereby restricting them and entangling entrepreneurs in endless litigation and confusion. Products are kept off the market. Firms that would come into existence do not. Profits that would be earned never appear. Intellectual property has institutionalized slow growth and landed the economy in a thicket of absurdity.“

There is little doubt that economic mobility is not well served by excessive grants of IP rights that extend monopolies indefinitely.

Government fosters inequality in many other ways. The mere existence of a confiscatory mechanism for legal revenue collection, and a complex bureaucracy in charge of distributing the spoils and making rules, will always attract high-powered rent-seeking resources and encourage cronyism. It is a graft machine. The very complexity of the tax code creates fertile ground for transfers via obscure breaks and carve-outs, while higher tax rates on others are required to fund the exceptions. Here’s another: the Export-Import Bank, which subsidizes exports for large corporations. A nice run-down of some of the many areas of “Welfare for the Rich” was provided a few years ago by Robert P. Murphy in The Freeman.

Unfortunately, direct efforts by the government to help the poor are often mere palliatives. At the same time, many of these programs are notorious for destroying work incentives, which undermines equality and economic mobility.

Government is simply not as well-suited to promoting equality as well-functioning markets, free of government meddling and government grants of monopoly. Profits in such markets attract new resources that compete away excess returns and bid prices downward, actions that tend to promote equality. The opportunity to compete without restraint not only vitiates artificial or permanent claims to profits; along with strong property rights, it encourages invention, economic mobility and growth.