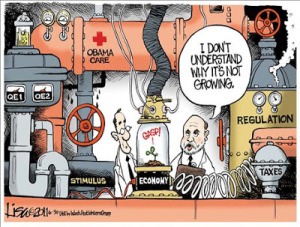 Economic freedom is strongly associated with higher living standards, but the United States is steadily working to reverse its historical gains. That conclusion is supported by the work of W. Michael Cox and Richard Alm from the William J. O’Neil Center for Global Markets and Freedom at the SMU Cox School of Business. They make use of an index of economic freedom published by Canada’s Fraser Institute, which is available for 94 countries going back to 1970. It incorporates 43 components such as tax rates, inflation, trade barriers, various regulations and the availability of credit.

“Hong Kong and Singapore, two former British outposts in Asia, have the highest freedom capital stocks, followed by the United States. India and China have adopted market-oriented reforms in recent years, but they’re still among the countries ranking low in freedom capital — a hangover from decades of central planning. Populism left Venezuela with a meager freedom capital stock.“

Cox and Alm fit a cross-country statistical model linking the freedom index to annual per capita consumption, which is a measure of the average standard of living. The data can be explored here. (I was hoping to see interactive scatter plots, but that may require the additional inconvenience of a download).

That freedom should be strongly associated with a society’s ability to consume may not be obvious to everyone, but it follows from some basic axioms: a more productive capital stock generates more choices and more consumables, and the capital will be more highly valued as a result. More freedom means broader choice and more flexibility over the use of capital, which enhances its value. There are many ways that freedoms can enhance the value of capital, such as lower taxes, fewer regulatory burdens and compliance costs, low inflation, and well-developed markets for capital funding. So it should be easy to recognize that the stock and value of a country’s capital are dependent on the freedoms under which it was cultivated. Cox and Alm refer to this contribution as “freedom capital”.

The U.S. does not fare well based on these criteria. According to Cox and Alm, the U.S. consumes at a level 22% above what is afforded by its freedom index, and the index has declined over the past eight years. These facts do not bode well for our future standard of living.

The Cox and Alm research is also reviewed by J.D. Tuccille in Reason. He adds some interesting details from the Fraser Institute’s “Economic Freedom of the World” report showing the dramatic way in which the poor around the world are affected by economic freedoms:

Economic freedom is also closely connected with civil liberties. Relatively free countries tend to respect people’s autonomy across the board. Authoritarian governments don’t confine their predations to any one area of human life. Freedom is a package deal.

So, if the United States is in for economic stagnation because of decayed economic freedom, we should expect that the poor will be hit hardest.“

I wish that Cox and Alm could arrange an audience with Pope Francis, whose ideas about helping the poor run precisely counter to these lessons.