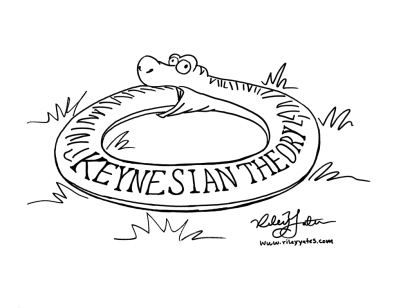 Here’s a major macroeconomic sacred cow among professional economists and the politicians whose fiscal profligacy they enable: the presumed salutary effect of an increase in government spending on economic activity, including its so-called “multiplier effect”. Government fiscal stimulus is prescribed by the Keynesian school of economics to remedy any decline in the total demand for goods. A classic case is “underconsumption”, or excess saving, such that labor and capital resources are in excess supply. The idea is that government will mop-up some of this excess saving by borrowing and spending the proceeds on goods and services, putting resources back to work. In the standard telling, digging holes and refilling them is as effective as anything else. The increased income earned by those resources will be re-spent, creating income for the recipients and leading to repeated rounds of re-spending, each successively smaller due to “leakage” into saving. Adding up all these rounds of extra spending yields a multiple of the original government stimulus, hence the Keynesian multiplier effect. The stimulation of the demand for goods and services pushes the economy back in the direction of full employment, thus correcting the original problem of underconsumption. Nice story.

Keynesian economics is a short-run, demand-based framework that delineates behavior by the constructs of national income accounting, segmenting demand into consumer spending, investment in productive capital, government spending, and net foreign spending (net exports). Except for the limit imposed by full employment, the supply side of the economy and the processes giving rise to growth in productive capacity are ignored.

Within the Keynesian framework, can offer many qualifications to the story of a shortfall in demand to which even a dyed-in-the-wool Keynesian would agree. First, government stimulus cannot have an effect on the real economy at a time when the economy is operating at full capacity, or full employment. The increased government spending will only lead to bidding against other uses of the same resources, increasing the level of wages and prices.

Another qualification within the Keynesian framework is that the leakage from spending at each round of re-spending is made greater by taxes on marginal income, thus reducing the magnitude of the multiplier. In addition, some of the extra income will be spent on foreign goods — another leakage that reduces the multiplier effect on the domestic economy. In fact, this is why multipliers for spending at local levels are thought to be relatively small. The more local the analysis, the more income will be re-spent outside the locality at each round. More fundamentally, private parties should know that increased government borrowing must be repaid eventually. At some level, they know that additional taxes (or an inflation tax) will be necessary to do so. Therefore, their reaction to the additional income derived from government demand will be muted by the need to save for those future liabilities. Put differently, consumers do not view the gain as an increase in their permanent income. That’s essentially the mechanism underlying the “Ricardian equivalence” between methods of funding government spending (government debt or taxes).

In the “real world” there are many other practical problems that lead to ineffectual and even counter-productive government stimulus. One is the problem of cost control endemic to the public sector. Related to this are seemingly unavoidable timing issues. These factors have a strong tendency to make counter-cyclical fiscal programs too costly and too late. There is also the tendency toward graft and cronyism wherever the government spreads its largess. The “perfectibility of man” is certainly not evident in the execution of government stimulus programs. Their economic impacts often become pro-cyclical, or even worse, they become permanent increases in spending authority. More on the latter below.

Deeper objections to the Keynesian framework have to do with its demand-side orientation and the conceit that government, solely by borrowing and spending, can contribute to “real demand” and add to a nation’s output. And even if government spending takes up slack at a time of unemployed resources or excess supplies, it is unlikely to resolve the conditions that led to the decline in private demand. Therefore, even if government stimulus is successful in spurring a temporary increase in actual production and utilization of resources, it is likely to delay or prevent the downward wage and price adjustments necessary to permanently do so.

Recessions are typically characterized by an effort to work off over-investment in various sectors: housing, commercial structures, oil and gas extraction and processing, technology assets, inventories, or factories. Over-inflation of asset values is usually at the root of malinvestment, often accompanied by overinflation of wages and prices. These dislocations do not occur evenly, but the market process acts to correct misallocations and mispricing precisely where they occur. It might take time, but if government steps in to prop-up weak sectors, forgive the economic consequences of mistakes, and place more upward pressure on wages and prices, the dislocations will persist. So again, even if stimulus and the multiplier effect offer a short-term palliative, the benefits are illusory in a real sense. The long-run consequences of failing to allow markets to repair the damage will be negative.

One of the greatest skills that economists should possess is the ability to discern the most plausible counterfactual in a given situation: the world as it would have played out in the absence of a particular event, often a policy initiative. This is a great shortcoming among those who subscribe to the efficacy of government stimulus programs. In the scenario just described, there will be a decline in capital investment, consumption, and saving, but that saving, whatever its level, will still be channeled into capital investments unless the funds sit idle in bank vaults. If the saving is instead absorbed by the government’s effort to fund a stimulus program, even that reduced level of investment will not take place. The net effect is zero! Thus, the Keynesian stimulus and multiplier effect represent a failure of the economics profession to “see the unseen”, as Frederic Bastiat would have put it. Unless government can produce something of value to generate income, perhaps something that improves private returns, it will not contribute to income growth.

Permanent displacement of private capital investment is the most fundamental detriment of government fiscal activism. That it might well supplant private production should come as no surprise. Matthew D. Mitchell and Jakina R. Debnam describe the phenomenon this way:

“The tendency for ostensibly temporary spending to become permanent spending helps explain why policy makers fail to take the Keynesians’ advice when it comes to surpluses. Though governments invariable go into deficit during recessionary periods, they rarely run surpluses during expansionary periods.”

“… Richard Wagner and Nobel Laureate James Buchanan concluded: ‘Keynesian economics has turned the politicians loose; it has destroyed the effective constraint on politicians’ ordinary appetites. Armed with the Keynesian message, politicians can spend and spend without the apparent necessity to tax.'”

In a footnote, Mitchell and Debnam note that Milton Friedman once said, “Nothing is so permanent as a temporary government program.” The Keynesian prescription for stimulus allows politicians to assert that they are empowered to rescue the unemployed or those suffering a loss of income. They want you to believe that they can do something. The multiplier gives license to still greater mischief on the part of politicians, because it can help politicians sell almost any pork-barrel project. But continuing government expansion requires that it extract resources from the private economy. That’s true whether the government spends directly on goods or redistributes, and the mechanics of these processes involve additional resource costs. As long as government can borrow private savings, politicians will disguise the true cost of their munificence to constituents. Economists should not be their enablers.