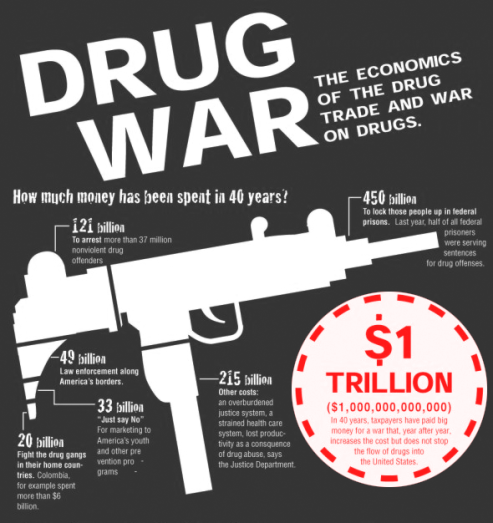 The U.S. wastes vast quantities of resources on the War on Drugs with nothing to show for it but counterproductive results. Drug use today is as commonplace as ever, despite the cumulative expenditure of many billions of dollars on law enforcement and judicial costs. We have ceded drug markets to organized crime, tolerated corruption of public officials, incurred the human and economic costs of millions of life-years wasted behind bars, and subjected users to impure and dangerous forms of contraband. And in the process, we have encouraged addiction, disease and death while dedicating relatively few resources to programs that might have helped these troubled souls.

Contrast that with Portugal’s approach to drug policy. The country’s decriminalization of drug use as well as harm reduction and treatment programs both deserve consideration in this context. Decriminalization took place in 2001: drugs are still illegal, but the penalties are very light. Treatment programs include a system of needle exchanges beginning in the early 1990s as well as various forms of outreach instituted in 2003-2005. Before the advent of these policies, Portugal had an extremely high rate of drug abuse; many feared that decriminalization would lead to further degeneracy, but no increase in drug use transpired, and the liberalized policies are credited with a drastic reduction in drug deaths and other tragic fallout. Consider the following:

These facts are taken from this discussion of the effects of Portugal’s drug policies, this Wikipedia entry, and the 2018 Portugal Country Drug Report from the European Monitoring Centre for Drugs and Drug Addiction.

As a fiscal matter, some of the strongest objections to Portuguese drug policy have to do with the granting of public aid to drug addicts, who usually have themselves to blame for their predicament. And in fact, decriminalization was accompanied by a decision to transfer funds associated with enforcing drug laws and punishing offenders into treatment and rehabilitation of addicts. This includes subsidized housing and jobs as well as loans for certain productive efforts. These strike me as better uses of public funds than a drug war, and by all accounts the programs have been successful. And to the extent that recovered addicts are able to lead productive lives, they add to the strength of Portugal’s economy. In an ideal, classically-liberal order, privately-funded lifetime insurability would avoid the need for public funding of these programs, but that is a reform for another day.

Like any prohibition of activity in which a plurality engages, laws against drug use are generally ineffective and counterproductive (also see here). Portugal’s enlightened approach to drug policy is praiseworthy, sets a great example for other countries, and might be more politically feasible than full legalization. However, as long as there are any penalties for drug possession, there will be a wedge through which rents can be extracted by the underworld. Full legalization would do the most to attenuate crime and other risks associated with drug use, and it would also maximize the resources available to address problems faced by addicts and drug-dependents.

Note: the poster above is from 2014… the numbers are larger now!