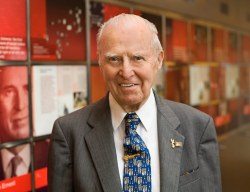 Great article in The Atlantic on Norman Borlaug, a Nobel Prize winner for his work in bringing high-yield agriculture to the developing world. His work has likely saved hundreds of millions of people from starvation and has slowed or even reversed deforestation in some countries. Yet Borlaug  became persona non-grata with some international funding organizations with the rise of the popular environmental movement, which found dubious reasons to oppose high-yield agriculture even as it saved lives. Today, Africa remains one part of the world with extremely low agricultural yields. Borlaug  spent the last part of his life working with African nations to establish more productive practices. He would have been 100 on Tuesday of this week.

1 thought on “An Obscure Agronomist, a Savior To Millions”