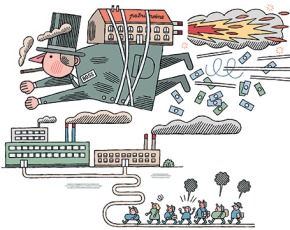 Clive Crook on Thomas Piketty’s much-acclaimed “Capital in the Twenty-First Century”: The Most Important Book Ever Is All Wrong. I believe the first part of that statement is intended as sarcasm, though Crook admits it’s an important book. It’s been called a Das Kapital for the 21st century. Tyler Cowen also has a review, which he summarizes here.

Piketty’s major thrust is that the return on capital will exceed economic growth in the future, leading to an ever-rising stock of capital and an ever-more-unequal distribution of income. A problem in his analysis (aside from the fact that the data he presents don’t always support his conclusions) apparently stems from a failure to account for wage dynamics: capital deepening increases wage growth. And capital deepening can be expected to lead to diminishing returns on capital. But never mind all that! Piketty says the return on capital will remain well in excess of growth, the capital stock will keep growing inexorably, and capitalists will earn increasing rents while wage income stagnates.

Crook concludes: “Over the course of history, capital accumulation has yielded growth in living standards that people in earlier centuries could not have imagined, let alone predicted — and it wasn’t just the owners of capital who benefited. Future capital accumulation may or may not increase the capital share of output; it may or may not widen inequality. … But even if it does, it won’t matter as much as whether and how quickly wages and living standards rise. That is, or ought to be, the defining issue of our era, and it’s one on which ‘Capital in the 21st Century’ has almost nothing to say.”