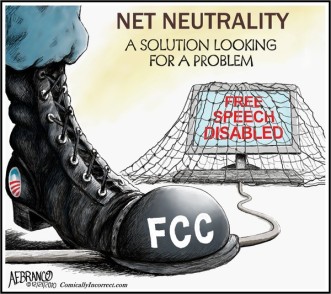 Net neutrality probably doesn’t mean what you think it means. It would essentially dictate that heavy network users, capacity hogs that often slow your access speeds, could not be charged a premium by providers to rationalize their usage. It would reduce incentives to increase network capacity and speeds. It would lead to less innovation on the internet. There are many other nuances that make net neutrality an awful proposition, including denial of the simple notion embraced by libertarians that private parties should be free to price their resources as they choose, and exposing the evolution of the internet to the manipulative hands of government regulators. If you want government control of the internet, then you want net neutrality.

Internet capacity is not like the air we breath. Providing network capacity is costly, and existing capacity must be allocated. Like any other scarce resource, a freely-functioning price mechanism is the most effective way to maximize the welfare surplus to be gained from this resource. Net neutrality would eliminate that solution. To those who fear corporate owners of the internet backbone, it should be noted that the market for backbone services is highly competitive, and network effects are so strong that it doesn’t make sense for them to price anyone out of the market.

How Net Neutrality Hurts the Poor is a fairly short blog post explaining how non-neutrality serves the best interests of the poor in less-developed countries and in the developed world. The author explains a simple truism (“Low-quality Scotch is part of the optimal stock of Scotch”) and applies it to internet access. As I’m fond of reminding my spouse on Saturdays, “Low quality repairmen are part of the optimal stock of repairmen,” and she agrees!

Here’s a good piece with additional background on the issue: Neutralism: The Strange Philosophy Behind the Movement for Net Neutrality