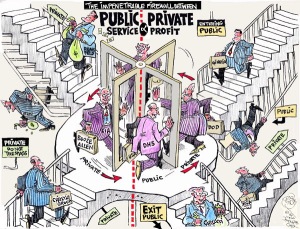 The administrative state is costly in many ways. It not only creates obstacles to economic growth. In promulgating and complying with its dictates, it absorbs vast amounts of resources within both the public and the private sectors. It also provides an avenue through which private elites can curry favor via lucrative contracts and favorable regulatory treatment, often gaining competitive advantages and even monopoly status. The opportunities for graft are legion, of course. The infamous revolving door in and out of government service reinforces the rent seeking potential afforded by this “fourth branch” of government. It is a prime example of the dangers of being governed by men rather than laws. Bureaucrats seem to become self-empowered to make wide-ranging and arbitrary decisions regarding matters not anticipated by any enabling legislation.

In “Bled Dry By The New Class,” Glenn Reynolds offers some insightful remarks regarding the sociological phenomenon that is the administrative state. He provides a telling quote from a frustrated Greek entrepreneur, which should be taken as a warning for us: “I, like thousands of others trying to start businesses, learned that I would be at the mercy of public employees who interpreted the laws so they could profit themselves.”