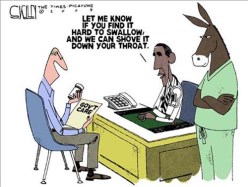 “If it weren’t for state power, the Little Sisters of the Poor would be happily not facilitating the birth-control purchases of its employees; the Barack Obama administration has attempted to force them to do otherwise.” That’s from Megan McArdle in a good piece on the Supreme Court’s Hobby Lobby decision. Here’s more:

The interesting question is why people on the other side view ceasing the coercion as itself coercive while arguing that the original law did not, in fact, force anyone to violate their religious beliefs. …while the religious right views religion as a fundamental, and indeed essential, part of the human experience, the secular left views it as something more like a hobby, so for them it’s as if a major administrative rule was struck down because it unduly burdened model-train enthusiasts.

That’s worth an LOL! Oh yes, it’s coercive if we can’t be permitted to coerce you. As a friend recently quipped, your reproductive decisions might not be your employer’s business, but you make it their business when you ask them to pay for your decisions. The economics of the decisions are secondary to First Amendment rights, as buttressed by the Religious Freedom Restoration Act.

The Hobby Lobby decision was not strictly about contraception, but as to the economics of contraception and whether it pays for itself, as many insist, this post offers some interesting perspectives. The economics are not quite as settled as some would have you believe.