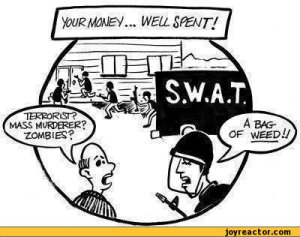 Violent crime in the U.S. is down by half since 1991. Why have we witnessed a militarization of local police forces? Why do we have 50,000 no-knock SWAT raids each year? Mark Perry asks these questions in a post quoting extensively from a recent John Stossel column on the subject. As Stossel observes:

SWAT raids are dangerous, and things often go wrong. People may shoot at the police if they mistake the cops for ordinary criminals and pick up guns to defend their homes against invasion. Sometimes cops kill the frightened homeowner who raises a gun.

… people’s homes are often destroyed, infant children have been burned with stun grenades, hundreds of family pet dogs have been shot and killed, and dozens of suspects and some police officers have died in these violent paramilitary operations.

These SWAT raids should be alarming to anyone concerned about civil liberties. The unnecessary and wasteful war on drugs is behind much of this activity. Any physical threats to the public and law enforcement associated with drugs would vanish, much as they did with the repeal of prohibition, if drugs were legalized. The sophisticated weaponry being acquired by local police is often surplus from American wars abroad. The federal government’s provision of these armaments establishes a link and a potential dependence of local law enforcement on federal masters. The public should regard this with great suspicion.