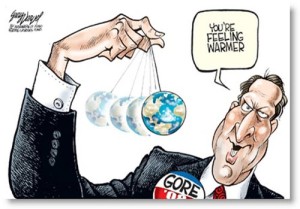 Today’s UN Climate Summit was, by all reports thus far, pretty much a waste of energy, that pun very much intended. It was an event for solemn repetition of good and misplaced intentions. Last week, Roger Simon challenged readers to “Suppose They Gave a Climate Conference and Nobody Came.” Well, a few people came, but Simon quotes Newsweek’s apprehension regarding “the failure of leaders from the U.N.’s three largest member nations—China, Russia and India—to attend.” Ron Bailey at Reason notes that neither the U.S. or China were ready to make any pledges regarding future emissions at the Summit. The entire affair was simply a political show, but there are parties to global climate negotiations with serious goals. More on the scam from Simon:

“I went to Copenhagen in 2009 for this website to cover another UN climate conference (COP 15), then considered to be extremely crucial. Several islands — Micronesia, I think — were supposedly about to go under from the rising tides. I ran into the representative from one of those islands and asked him if he was worried. He started to laugh and shook his head. So I asked him what he was doing at the conference. I want the money, he said.”

Nevertheless, there is a political constituency for politicians who wish to play the climate card. It has been forged by certain grant-hungry climate scientists, spotlight-hungry advocates, and an always crisis-hungry media  playing to the back row of the science class. As former Obama science advisor Steven E. Koonin writes, the science is not settled. Anything but.

The editorial The People’s Climate Demarche in the Wall Street Journal describes some of the “free-lunch” nonsense from the climate lobby that passes for good economics, as well as the politics of why momentum on climate negotiations is stalling.

Perhaps a bigger spectacle leading up to the UN Summit was the “People’s Climate March” in New York City on Sunday. Basically, if you think everything about a modern, market-driven society sucks, then the climate change bandwagon is for you. It’s an all-inclusive excuse to bash … almost anything, but especially anything conceivably subject to confiscation! The participants apparently have no inkling that without the fruits of modern capitalism, they would be without the material comforts to which they are accustomed (such as electricity) and have life expectancies of about 40 years from birth.

Roy Spencer minces no words when describing the march:

“The marchers are trying to teach us how we should live our lives, when they have no clue what life would be like if they got their way. Someday we will have a realistic, affordable, abundant energy alternative to fossil fuels. But that day is not here yet. And its arrival cannot be legislated or negotiated with a treaty.”

In another interesting sidelight, Anthony Watts posts a copy of a Craigslist ad soliciting paid volunteers for the climate march.

Finally, the climate march and the subsequent “Flood Wall Street” march (which was described in Reason as more of a trickle) are obviously close cousins to the Occupy Wall Street protests of 2012. Glen Reynolds’ syllabus for OWS is simply a gem.