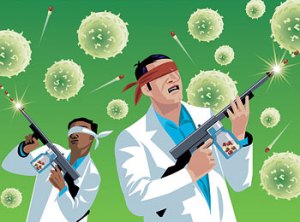 Cancer research is proceeding along a number of promising avenues, but there is an apparent gulf between the promise of one class of potential cures and the emphasis it receives in terms of publicity and funding: cannabinoids. Contrary to what some might suspect, when I say that cannabinoids show promise, it is not grounded in pseudoscientific balderdash, a topic on which I posted last night! Indeed, there is a brief but solid history of research showing the potential of cannabinoids in fighting cancer, as shown at this page on the National Cancer Institute website. The Classical Values blog has a post with quotes from the site; and CV bemoans the lack of attention devoted by the media to this type of research.

Unfortunately, until more effort is devoted to studying the effects of cannabinoids on cancer in humans, including optimization of its delivery, those cancer victims with an awareness of the research will be consigned to using covert and undoubtedly less effective means of ingestion, and many others will go uninformed. A disclaimer: it should go without saying that cancer victims should not undertake experiments with cannabinoids to the exclusion of other treatments recommended by personal physicians or specialists.

Cannabinoids may hold promise in treating other prominent disorders. Again at Classical Values, this post discusses their potential usefulness in preventing and treating Alzheimer’s disease, quoting a study conducted at the University of South Florida.