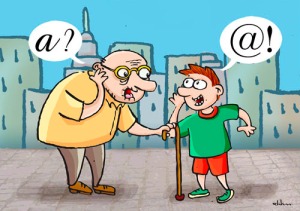 President Obama wants to regulate your internet. Today, he encouraged the FCC to adopt rules requiring “net neutrality,” ostensibly rules that would keep the internet “free, open and fair,” as a common jingo asserts. Here’s a six-minute interview of Thomas Hazlett that gets to the heart of the problem: the FCC does not know how to impose a central plan on internet services. Nick Gillespie, who conducted the interview with Hazlett, says:

“There are specific interests who are doing well by the current system—Netflix, for instance—and they want to maintain the status quo. That’s understandable but the idea that the government will do a good job of regulating the Internet (whether by blanket decrees or on a case-by-case basis) is unconvincing, to say the least. The most likely outcome is that regulators will freeze in place today’s business models, thereby slowing innovation and change.”

I posted on the subject of net neutrality a few months ago. Gosh, I just hate to quote myself, but here’s a brief slice:

“Internet capacity is not like the air we breath. Providing network capacity is costly, and existing capacity must be allocated. Like any other scarce resource, a freely-functioning price mechanism is the most effective way to maximize the welfare surplus to be gained from this resource. Net neutrality would eliminate that solution.”

Of course, “net neutrality” is a misnomer. It is hardly a “neutral” situation when big users of internet capacity can soak up all they want, having paid for a plan with a certain download speed. 30 mgs per second is one thing, and that is typically how ISPs price their services (by speed). But that speed, for a large number of movie downloads (for example), can absorb lots of capacity, leaving that much less for other users. Again, that is not neutral in its effect across users. In fact, it is a classic tragedy of the commons: the under-priced resource is over-consumed, and there is little incentive to expand capacity, as the rewards flow to the over-consumers. Is that fair in any sense?

Advocates of net neutrality often contend that ISPs have an interest in limiting network capacity in order to extract monopoly rents from users. Under conditions of rapidly growing demand and competition for end users, that hardly seems plausible. A limited network is a liability under those conditions, so this rationale for net neutrality rules is completely misplaced.

3 thoughts on “The Non-Neutrality of Network Hogs”