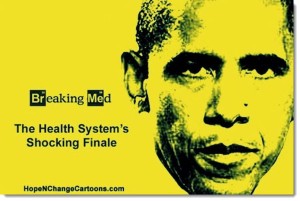 Perhaps I’d quit writing about Obamacare if President Obama would quit lying about it. No, probably not, because the flaws of Obamacare are so numerous that they deserve to be exposed again and again. In fairness to Obamacare, the president lies about many other things, but tonight’s topic is his latest assertion about the supposed success of the health care law. On the occasion of the five-year anniversary of the passage of the ACA, the president said:

“… one thing couldn’t be clearer: This law is working, and in many ways, it’s working even better than anticipated… After five years of the Affordable Care Act, more than 16 million uninsured Americans have gained the security of health insurance – an achievement that has cut the ranks of the uninsured by nearly one third.”

Actually, the Administration claims that the ACA is responsible for an additional 16.4 million insured Americans, 14.1 million of which are presumed to have gained coverage since the start of open enrollment in late 2013. The latter figure was extrapolated by HHS from Gallup survey data, and its full attribution to the ACA is gratuitous. Even if we stipulate to the integrity of the extrapolation, it is severely at odds with information reported on actual enrollments, as noted here by Edmund Haislmaier:

“Taken together, the administrative data tell us that the number of Americans with health insurance coverage increased by around 9.7 million individuals during 2014—not the 14.1 million estimated by Health and Human Services.”

Not only are the incremental insureds severely overstated, but Obama now asks us to judge the “success” of the law based on an implied 35% reduction in the number of uninsured, which still leaves well over 25 million people uninsured. Lest anyone forget, the original projections for exchange enrollments were far higher than even the rosy numbers reported by Obama. The so-called “target” population remains mostly unserved. The vast bulk of the coverage gains have come from Medicaid, which is free to eligible enrollees. Exchange enrollments have been light relative to expectations despite the promise of subsidies. (About half of the enrollees receiving subsidies will have to pay some of those benefits back to the IRS, according to the Kaiser Family Foundation. While the other half of subsidy recipients will get refunds, on average, the taxes owed by the first group will pose hardships.)

As noted above, a number of previous posts on Sacred Cow Chips have covered the flaws inherent in Obamacare. These fall into two general categories of destructive effects: 1) on the market for health care insurance; and 2) on actual access to, and delivery of, patient care. See here, here, and here for discussions of various clumsy and shortsighted ways in which the law attempts to regulate care. Scott Atlas points to another fundamental truth about Obamacare: it fails the poor and middle class by inhibiting access to care and making employer-based coverage less likely. Edmund Haislmaier has another excellent article on four key design flaws in the ACA as it relates to health care coverage. The negative employment effects of the law will continue to play out.

The cost of Obamacare to taxpayers is staggering, despite the CBO’s recent reduction in its estimates due entirely to lower than expected enrollments:

“The CBO now projects that the law will cost nearly $2 trillion over the next ten years. Obamacare’s subsidies alone will cost $1.1 trillion. In 2010, the agency put the cost of the entire law at $940 billion over its first decade.”

The author at the last link above also notes that the employment effects of Obamacare will be costly to taxpayers:

“Obamacare hasn’t just failed to expand coverage as projected — it’s caused more people to lose their insurance than its architects intended. The CBO now estimates that 10 million people will lose their employer-provided health benefits by 2021. That’s a tenfold increase over the agency’s 2011 projections…. Employers might cut back on their workers’ hours so that they’re considered part-time — or stop hiring workers. Some firms may dump their health plans altogether, thanks to Obamacare’s many other cost-inflating mandates and regulations. The fine may be cheaper than the cost of coverage.”

Some of the statist cheerleaders of the administration offer anecdotes and testimonials from the new class of happily insured. Given the (expected) subsidies and some of the expanded coverage provisions, these individuals certainly think they have something to be happy about, but anecdotes are easy. A great many anecdotes have also been heard about lost individual coverage, severely limited and even lost access to physicians and care, lost work hours and reduced employment opportunities. Further disappointments lie ahead, even for the newly insured. Provisions of the Affordable Care Act (ACA) that are least likely to be popular have been delayed by executive fiat.

We have a destructive health care law that should be replaced at our earliest “convenience”. That will be either when Obama leaves office or, more optimistically, in June if the Supreme Court rules against federal exchange subsidies in the King v. Burwell case.

This is unlikely to be my last post on Obamacare, if the history of Obama’s mendacious claims about the law is any guide: “If you like your coverage, you can keep your coverage“. “If you like your doctor, you can keep your doctor“. “The individual mandate is not a tax“. “No family making less than $250,000 a year will see any form of tax increase“. “I will not sign a plan that adds one dime to our deficits – either now or in the future.” The ACA will “cut the cost of a typical family’s premium by up to $2,500 a year.” “I don’t believe that government can or should run healthcare“. All lies about Obamacare issued from the lips of President Obama. And I could go on…