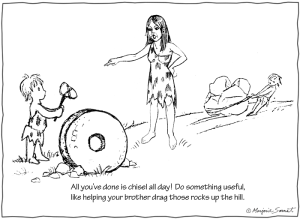 Imagine a food distribution system that mirrored the organization of K-12 education in the U.S. How do you think it would work out? That thought exercise was conducted four years ago by Don Boudreaux in his Wall Street Journal op-ed: “If Supermarkets Were Like Public Schools”(gated). Boudreaux has helpfully reblogged this op-ed at Cafe Hayek as part of his post “Separate School From State“. Read the whole thing! Because this is a topic in economics and I am so very pedantic, I prefer not to use the term “market” at all in this context. After all, a public “supermarket”, as discussed by Boudreaux, is no more a market than a public school is a market. I will use the term “public grocery store” instead, except when quoting Boudreaux.

The comparison of grocery stores to schools involves outputs that are both considered essential. In fact, there should be no argument that food is the more essential of the two. Yet the essential nature of educating children in a modern society is thought to be an important rationale for the existence of a public school system. Would supporters of public education care to apply the argument that “market forces can’t supply quality education” to another essential product, like food?

Economic theory predicts that the monopoly status held by public grocery stores over the provision of “free food” within their districts would cause the quality and variety offered at those stores to suffer. This is just a form of restraining trade, which is what monopolists do. The classic monopolist charges a higher price and produces less output. Exactly the same is predicted in Boudreaux’s experiment.

One difference in comparing food stores to schools is that families, presumably, could purchase some of their groceries from private stores and meet the rest of their food needs from their district grocery store at no marginal cost, whereas the school selection is all public or all private. However, this does not invalidate Boudreaux’s assertion that the quality offered by the monopoly provider will suffer.

Like public schools, there would be massive variations in quality across public grocery stores due to variation in the tax base from one district to another. This would tend to reinforce differences in the value of property across districts, because it is so desirable to live in a district with a good public grocery.

Here’s an extended excerpt from Boudreaux:

Responding to these failures, thoughtful souls would call for ‘supermarket choice’ fueled by vouchers or tax credits. Those calls would be vigorously opposed by public-supermarket administrators and workers.

Opponents of supermarket choice would accuse its proponents of demonizing supermarket workers (who, after all, have no control over their customers’ poor eating habits at home). Advocates of choice would also be accused of trying to deny ordinary families the food needed for survival. Such choice, it would be alleged, would drain precious resources from public supermarkets whose poor performance testifies to their overwhelming need for more public funds.

As for the handful of radicals who call for total separation of supermarket and state—well, they would be criticized by almost everyone as antisocial devils indifferent to the starvation that would haunt the land if the provision of groceries were governed exclusively by private market forces.

In the face of calls for supermarket choice, supermarket-workers unions would use their significant resources for lobbying—in favor of public-supermarkets’ monopoly power and against any suggestion that market forces are appropriate for delivering something as essential as groceries.“

That sounds all too familiar. Even with massive state redistribution of public grocery store funding from wealthy to poor districts, the result would be much the same, as it is with public schools. Increased grocery store funding cannot correct the larger problems plaguing the community, many of which are created by the welfare state itself. And increased funding does not correct fundamental dislocations created by a monopoly, especially a public monopoly. The entrenched, politicized interests that infest public institutions always resist changes that might improve quality. They are typified by bloated administrative machinery and a general lack of responsiveness to the community. Only competition and choice can eliminate these tendencies and drive improvement.

An objection that might be raised to Boudreaux’s comparison is that public schools must accommodate a student population with wide variations in learning ability. It may be claimed that this variation strains the resources of public relative to private schools. However, that burden is due in large part to the structure of the education system. A benefit of competition and choice is the extent to which it can accommodate diverse needs, and there is no reason why education should prove to be an exception. In fact, diverse needs are already met very well by private education, but they serve only “private school families.” Empowering all families to choose the schools that best accommodate their needs would bring higher quality to our K-12 education system.