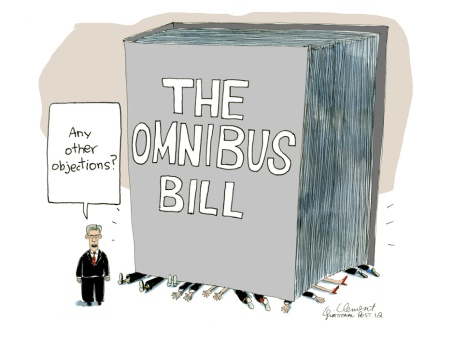 Here’s a great idea for making the federal government more transparent and accountable: force Congress to stick to single-subject legislation. Every bill should focus on a single issue with a clear statement of that issue. There would be no last-minute, unrelated amendments to legislation, and no omnibus bills as thick as several phone directories. This is the purpose of a three-page bill to be introduced by Representative Mia Love (R-UT). Glenn Reynolds explains the bill in more detail in “Want To Know Why Voters Are So Mad? Mia Love Has The Answer“. I’ll quote Reynolds at length, but do read the whole thing:

“A bill that’s so long that nobody can read it is, naturally, pretty likely to escape scrutiny. With thousands of pages and hundreds or thousands of provisions in the bill, what’s the chance that any particular provision will be noticed or criticized?

And even if a few provisions are criticized, when they’re tied to a bill that rewards literally hundreds of constituencies, there’s not much chance they’ll be shot down. Legislators, and special interests, have a vested interest in sticking together and being sure that the whole bill passes. Individually, most of these lousy provisions wouldn’t pass, but when banded together for mutual protection they can.   .…

Often, most of the provisions are written by lobbyists and inserted by tame members of Congress. The public isn’t really represented at all. That’s not an accident — it’s by design.“

No wonder the federal government and the public debt have grown to outrageous proportions. Reynolds would prefer a constitutional amendment on this issue similar to some state constitutions, but he supports Love’s bill as a second-best solution. The bill would also enable judicial review of potentially unrelated provisions of legislation, should they be challenged as such. Reynolds notes that cronyism often relies on the ability to sneak provisions into legislation to avoid scrutiny. Love’s bill might even encourage a return to the older congressional practice of subjecting appropriations to more thorough review in committee before going to the floor.

The tendency for legislation to grow seemingly misplaced appendages is also one of the reasons for the confusing accusations heard in the debates for the presidential nominations. Apparently, it’s possible for sponsors of legislation to be unaware of certain provisions attached to their bills. At the very least, it facilitates a less transparent form of political “horse trading”: I’ll vote for your bill if you allow me to attach an unrelated  provision that won’t be noticed.

The Love single-issue bill is a great idea, but there is likely to be strong resistance given the extenuatory pressures faced by many members of Congress, and their predictable reluctance to change the status quo. Hmm, perhaps Love can get her bill attached to another piece of legislation. Wouldn’t that be sweet irony!