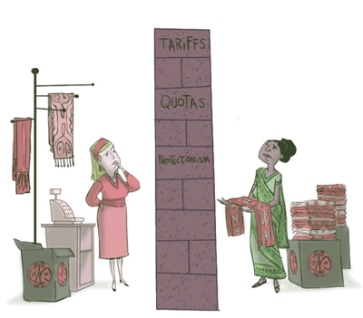 Trade makes us richer, not poorer. The anti-trade rhetoric spouted by neo-mercantilists like Donald Trump and Bernie Sanders is about as sensible as a boycott on goods produced in the next town, or for that matter, on anyone with whom one might otherwise choose to trade. Don Boudreaux perfectly captures my feelings about the rising trend of protectionist sentiment by comparing it to geocentrism:

“Lately I feel as I imagine an astronomer would today feel if, centuries after Copernicus and Galileo proved beyond a shadow of a doubt that the earth isn’t the center of the solar system, large numbers of people – including popular media pundits and politicians – began to insist that the sun and the planets and the stars do indeed all revolve around a stationary earth that is situated in the center of the universe.“

The very motivation for trade is to obtain something of value that one did not produce, to acquire that which one cannot easily acquire without trade, or to acquire it on more favorable terms than otherwise. It recognizes the reality that one’s productive efforts should be focused in an area that best suits their skills or natural talents. That’s better for the individual and better for society! Countries should produce what they are best at producing, which gives them a cost advantage in their areas of specialization. Trade allows individuals and nations to specialize in production but diversify in consumption, allowing them to enjoy access to the broadest possible range of goods and services produced worldwide.

The consummation of any trade heralds the attainment of mutual benefits to the parties: one produces and employs at a profit; the other consumes a thing of greater value than the price paid. The payments for foreign goods must come from either domestically-produced goods or from foreign investment in domestic real estate, buildings, factories or other real and financial assets. That is, if we purchase more goods from abroad than we export, then foreigners must either hold the dollars they receive or invest them in other ways. The latter represent trades in assets, and those trades, too, are mutually beneficial. The result is that U.S. investors gain and/or the economy benefits from new, productivity-enhancing plant and equipment, not terrible outcomes. Trade deficits are balanced by capital surpluses, and trade surpluses are balanced by capital deficits. Taken together, trade in goods and capital (assets) always balance and are mutually beneficial in every case, whether we run a trade deficit or a surplus.

That said, it’s worth emphasizing that so-called free trade agreements are something of a sham. Countries don’t trade. People do. Unfortunately, I have indulged the notion of national trade negotiation in the past, if only implicitly, by vouching for trade agreements like NAFTA and TPP as sort of second-best solutions to the horrid reality of trade restrictions promulgated by protectionist politicians. I reasoned that dismantling those barriers, one-country (or region) at-a-time was preferable to doing nothing. However, negotiations like these become mired in extraneous issues such as environmental policies, labor laws, immigration rules and other commercial policies. Nor do those negotiations always inhibit domestic subsidies to politically-favored activities. Indeed, they might actually encourage subsidies for value-eroding projects. Again, the entire process of trade negotiations is extraneous to the extent that trade takes place between individuals. Unfettered gains from trade require the absence of trade barriers. Dropping them unilaterally would benefit consumers, encourage efficiency by domestic producers, and provide a great example for other nations.

Opponents of trade, like Messrs. Trump and Sanders, lack a basic understanding of the reasons why individuals engage in cooperative exchange. Or at least they fail to acknowledge, for political reasons or sheer density, that what improves well-being at home is freedom to transact, across our borders as well as within our borders. To prevent this activity is to forcibly deny individual freedom. Boudreaux makes this point be asking trade opponents a series of questions, the first few of which are listed below:

“– Are you made richer if the supermarket … at which you once shopped hires armed goons to force you to start shopping there again?

– Do you believe that the owners and the employees of [that store] are so ethically entitled to your continuing patronage as a consumer that they are justified in employing armed goons to prevent you from shopping elsewhere?

– Do you believe that, now that [the store] has successfully forced you not to shop at competing supermarkets, that the owners and employees … will work as diligently and as creatively as possible to keep the prices they charge low and the quality of their service high?

– Do you believe that the higher profits and higher wages reaped by [the store’s] owners and workers as a result of their holding you hostage as a customer make you more prosperous?

– Do you believe that the higher profits and higher wages reaped by [the store’s] owners and workers as a result of their holding you hostage as a customer make your community more prosperous, even though [the store’s] higher profits and higher wages are necessarily funded by money that you and other … ‘customers’ are forced not to spend on other goods, services, or investment options?

It is difficult to believe that educated people believe restrictions on the freedom of individuals to cooperate with others will improve their well being. Of course, those educated people are often politicians who stand to benefit from frightening voters, and who have no interest in reminding them that a flow of foreign goods broadens choices, reduces prices, and provides valuable discipline to domestic businesses. Without competitive discipline, we forgo important benefits and instead allow quality and price to come under the arrogant power of monopolists. There are, of course, many producers who are willing to provide meaningful support to politicians who will protect them from foreign competition. That’s not capitalism. Its cronyism!