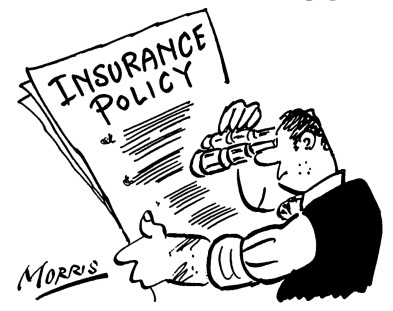 Anyone signing a contract better know the terms to which it binds them. They sign voluntarily and do so because they believe it has value. They are presumed to understand what they are obligated to pay and when; what they are entitled to receive, when, and under what circumstances; what actions (and non-actions) are required of them to “perform” under the contract; and what recourse they have should the counter-party fail to perform. The value they perceive upon signing is always based on an expectation. Sometimes, that expectation summarizes risks they are paying to avoid, even as a counter-party is more than willing to carry the risk. The contract is signed and everyone is happy… enough.

Health insurance is an example to which I’ve dedicated ample space over the past couple of weeks (see the links in the left margin). Obviously, one buys health insurance before knowing an entire series of outcomes. The contract specifies what kinds of expenses the insurer is obligated to pay. Insurance is a highly complex product, and so an insurance policy or contract must be relatively complex, as the cartoon above suggests. In a well-functioning market, however, the insured pays a premium no higher than they consider worthwhile. Everyone would like to pay less, but absent a government mandate (heh!), no one is obligated to buy.

The ink is dry and life goes on. The premium is paid, health needs arise, costs are incurred, and sometimes those costs exceed a limit (the deductible) above which the insurer is obligated to pay at least a portion.

A calamitous health event typically brings heavy costs, and this possibility is exactly why people buy coverage, and it is exactly why insurers demand sufficiently stiff premia. These things happen to a fairly predictable percentage of an insurer’s  customers, but with enough variance to make the cash flows risky. As a backstop, insurance contracts sometimes include limitations on total lifetime benefits or on payments for certain kinds of treatments. Pre-existing conditions are a prominent example of limiting the risks that enter the risk pool, but there are other possible limitations on treatments and other aspects of care. While these are known upfront, disastrous health outcomes and their financial consequences are not.

An increasingly common refrain is that no one should profit from an individual’s acute health care needs, and that health insurers do just that. For logical consistency, this same complaint should be leveled against doctors, nurses, paramedics, hospitals, medical equipment manufacturers, and pharmaceutical companies. They all earn income by providing for health care needs, whether medical or financial, and income is income, after all. Whether that income is a wage or a profit is irrelevant. They are both forms of compensation for the use of resources. The major difference between insurers and the other income-earners is that insurers handle the financial risk of potential health care needs and pay when those needs arise, within and up to policy limits.

The crux of the complaint, however, is that insurers can deny claims, thus protecting their profits. Certainly there are claims denied for which the rationale can be disputed. Just as certainly, a financially prudent insurance company must impose some limits on the benefits offered by their policies. These limitations might preserve profitability, but they also protect the contingent benefits of other insureds as well as the solvency of the carrier. Those objectives are not independent.

The insurance buyer reveals the value of the contract ex ante, but sour grapes are easily conjured ex post if a claim is denied, no matter the agreed-to provisions of the insurance contract. The insurer is under no greater obligation to pay costs in excess of policy limits than the doctor, the nurse, or the man in the street. Yet insurers take special blame when inadequate coverage is an issue, whatever the reason.

Hospitals and physician practices sometimes provide uncompensated care. There are also a number of support organizations for severely-ill but inadequately insured patients. So, private charity is one answer to the dilemma of extreme health-cost outcomes. Public aid is another, and the appropriate breadth of the state’s role in cases of pre-existing conditions and extreme individual health care costs is a legitimate question.

In the end, private health insurers provide a valuable service by pooling and carrying the financial risk of health care events faced by individuals. Health insurance profits as a share of owner’s equity have fallen well short of market-wide averages in recent years (see my last post), though I regularly hear outrageous claims about excessive profits in the industry.

It’s not unusual for a buyer to feel remorse after signing a deal, but in cases of health coverage shortfalls, one could say that the insured bet too little or qualified for too little, or one could say that society doesn’t set aside enough resources to adequately care for the sick. However, one cannot say that the resources dedicated to arranging private coverage deserve no reward, or that the business should be pillaged on account of certain policy limitations, or that the future claims of other policyholders should be hijacked. Those who proclaim such nonsense are guilty of severe ethical misjudgment.