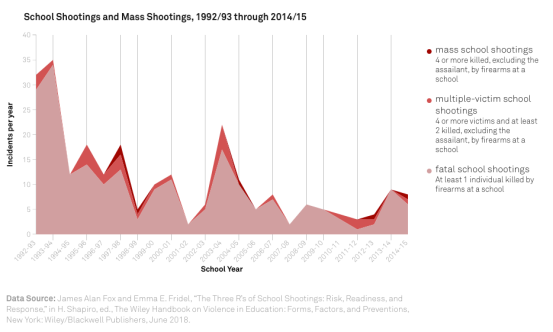 I’ll say one thing for the high schoolers participating in the “March For Our Lives“ political front: they are no more ignorant about guns and the Constitution than their anti-gun, adult counterparts. These naive kids are learning the charms of virtue signaling, newly imbued with so much superstition, misconception, misplaced blame, and inflated self-regard that you’d be hard-pressed to engage most of them in reasoned discussion. But I reserve my highest disdain for adults who shake their fingers and say, “How dare you speak critically of these poor kids, who survived the tragedy that took place at their very own school.” Indeed, some of the Parkland students saw the mayhem with their own eyes. but that admonition is a sham show of indignance designed to squelch legitimate debate. The debate would be unnecessary if not for the anti-gun lobby’s opportunistic exploitation of children befallen by tragedy.

First, as I noted recently on SacredCowChips, the supposed escalation in mass shootings at schools is a myth. Northeastern University provides this summary of the research quoted in my post, including the chart on the long-term decline in school shootings shown above. In light of these statistics, the lead researcher, James Alan Fox, believes that most school security measures are counter-productive, including proposals to arm teachers. I do not fully agree, but be that as it may, it is astonishing that the media and large swaths of the public have accepted as fact the myth of a school shooting epidemic.

The ignorance of would-be gun controllers about guns themselves is legendary. Few of them can actually define an “assault weapon” yet are convinced that they must be banned. The cosmetic addition of certain features to a standard semi-automatic rifle apparently makes these guns too “scary”. And there is little understanding that standard rifles sold today, which fire one shot at a time, are semi-automatic weapons! Rifles, by the way, are involved in only a small fraction of gun homicides, so the focus on “assault weapons” is misplaced. Given this level of ignorance, it’s all too easy to dismiss the gun control crowd as unworthy of a real debate over gun regulation.

Of course, the crux of the debate revolves around constitutional rights. While many of those in favor of stricter gun regulation disavow any desire to repeal the Second Amendment or to actually confiscate guns, there is a significant contingent among them harboring that as an end-goal. Their ideal is politically laughable because it would never get a two-thirds vote of each house of Congress, let alone ratification by 3/4 of the states.

The Second Amendment is described by its foes as outdated and dangerous. I submit, however, that the right to defend oneself against predators, human or otherwise, is a natural right and not subject to obsolescence. The Second Amendment was also intended as protection against tyranny by government, and it serves as protection against a tyranny of any majority or rogue minority. Gun-rights critics argue that the founders of our country did not anticipate the powerful weapons available today, and that they would never have intended citizens to be armed with them. The claim is dubious because the founders certainly would have believed that citizens should have the freedom to arm themselves at least in proportion to the arms used by potential predators (please forgive the use of the term “assault weapons” at the link).

Frankly, I do not expect government tanks to roll down my street on a mission to confiscate guns. Instead, the first step would be a strongly-suggested voluntary sacrifice of weapons. Later, perhaps actual confiscations would be attempted via small detachments of authorities or perhaps by marauding, black-shirted proxies. But confiscations won’t happen as long as a serious threat of reprisal exists, with reasonably powerful weapons, and that is a credit to the Second Amendment.

There are serious misconceptions (not to mention plentiful media propaganda) about the likelihood that stricter gun laws can reduce gun homicides, or that they could have prevented the mass shooting tragedies that have occurred. Some of those shootings are better viewed as failures of law enforcement — examples are the lack of official follow-up on prior tips about the shooter in Parkland, FL, the failure of the school’s resource officer to engage the shooter, the failure of the FBI to detain a shooter prior to an attack at the Pulse nightclub in Orlando, and in still other cases, the failure of background checks to identify individuals as ineligible to purchase guns. There is little doubt that proper enforcement of existing law and protocol would have prevented a number of mass shootings. The focus should be on improving the existing system before expecting responsible citizens to happily consent to further erosion of their natural and constitutional rights.

Strict gun regulation would certainly infringe on liberty, leaving private citizens defenseless in exchange for tenuous assertions of social benefits. Defensive gun uses (DGUs) are thought to far outstrip gun homicides (seven posts touching on that subject are at this link). If guns could be effectively outlawed in the U.S., other instruments of homicide would replace guns because so much killing is driven by the drug war, gang activity, and other social dysfunctions. The same is true of suicides. If you recognize the futility of the war on drugs, you shouldn’t expect much success from a war on guns. Criminals will acquire guns whether they are illegal or not, so the ability to defend oneself with equal force is critical. There is a lively debate over the empirical research on the efficacy of stricter gun laws, but it’s always good to be skeptical when it comes to government prohibitions. Control advocates often cite Australia as an example of successful firearms control, but the country’s gun ban and buy-back program was ineffective in reducing gun homicides (also see here).

Finally, it’s appalling to see the depths to which certain radical enemies of gun ownership will sink in attempting to cast blame on their opponents for mass shootings. In fact, they have blamed not just the NRA, but all gun owners for the Parkland shooting and gun homicides generally. But the NRA represents responsible, law-abiding gun owners and promotes safe and responsible gun use. Roughly 47% of adults in the U.S. have guns in their homes, and they own guns for self-defense or sporting purposes. Attempts to shame them into supporting curtailments on their liberties is obnoxious and rather foolish because it is so unlikely to be fruitful approach. Successful codification always hinges on consensus, which just doesn’t exist with respect to gun law in the U.S.

The media have fawned over the students who have participated in the March For Our Lives campaign. The childrens’ ignorance of constitutional principles, and guns of course, is noteworthy, but their exploitation by powerful political and economic forces is pathetic. The significance of their numbers has been exaggerated as well: reports show the crowd size at the march in Washington, DC was about a quarter of what the organizers claimed. And the anti-gun students have failed to convince many of their peers, according to a poll conducted by USA Today/Ipsos. Perhaps as the spotlight fades, more of these student protestors will have occasion to study the U.S. Constitution and the natural rights it protects against government overreach. No matter how the kids feel now, I’m certain that many of them will be responsible gun owners someday.

1 thought on “March of the Benighted Pawns”