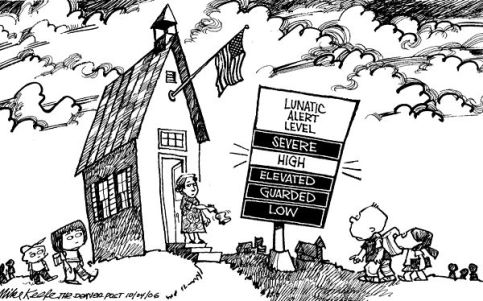 It’s not possible to exaggerate the tragic nature of a school shooting, but the frequency and trend in such events is often overstated. A wave of misinformation about mass shootings in schools is circulating in the wake of the massacre at Marjory Stoneman Douglas High School in Parkland, Florida. That awful day notwithstanding, the so-called epidemic of mass shootings underway in American schools is a fiction. Criminology professor James Alan Fox provides an illuminating discussion of statistics on school shootings since 1990:

“Since 1990, there have been 22 shootings at elementary and secondary schools in which two or more people were killed, not counting those perpetrators who committed suicide. … Whereas five of these incidents have occurred over the past five-plus years since 2013, claiming the lives of 27 victims (17 at Parkland), the latter half of the 1990s witnessed seven multiple-fatality shootings with a total of 33 killed (13 at Columbine).“

But what about reports that there have been 290 school shootings over the past five years? Fox addresses that claim:

“Nearly half of the 290 were completed or attempted suicides, accidental discharges of a gun, or shootings with not a single individual being injured. Of the remainder, the vast majority involved either one fatality or none at all.“

Some of the gun fatalities in schools are drug- and/or gang-related. I have written about the destructive effects of drug prohibition before, and school shootings are a dimension of that problem. The drug war has done much to keep the overall homicide rate elevated in the U.S. Suicides, in-school or not, are relatively insensitive to the availability of guns, as international data show.

Any shooting of an innocent should be mourned, particularly when it is a child. But there are many dangers in the modern world that loom larger than school shootings, once they are reported accurately. Fox notes the following:

“Over the past quarter-century, on average [of] about 10 students are slain in school shootings annually. ... Compare the school fatality rate with the more than 100 school-age children accidentally killed each year riding their bikes or walking to school. Congress might be too timid to pass gun legislation to protect children, but how about a national bicycle helmet law for minors? Half of the states do not require them.“

Anyone close to a victim can be forgiven for calls to action they might make in the midst of their grief. However, it’s wise to keep a proper perspective on events before rushing to legislate policy changes. The frequency and trend in mass shootings at schools has been greatly exaggerated, and largely in service to a political agenda. The news media does a disservice to the public by propagating this lie (and it is not the only falsehood in circulation). It would be appropriate to call it “fake news” and dispense with the false sense of urgency it creates in the debate. Reducing the risk of school shootings is an important objective, but let’s not distort the magnitude of the risk.