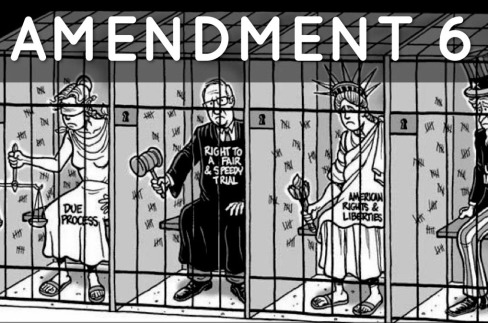 Our criminal justice system is not the exemplar of due process we’d like to think. Instead, the deck is often stacked against defendants because prosecutorial incentives, mandatory minimum sentences and plea bargaining interact in perverse ways. This is exacerbated by our tendency to demand laws against every behavior that offends us, some that are redundant, some with lower burdens of proof, and some that are just silly. Civil justice is subject to excesses as well, as claims of victimhood are bounded only by the fertile imaginations of plaintiffs’ attorneys, but that’s a subject for another day.

Prosecutors tend to be ambitious, which is not necessarily a bad thing. But the U.S. is unique in electing prosecutors, and a “tough-on-crime” message is often successful at the polls. This magnifies the incentive for aggressive prosecution to achieve a high rate of conviction and lengthy sentences. Of course, defendants are often at a disadvantage in terms of the quality of their legal representation, but beyond that are a variety of prosecutorial tactics that can be used in pursuit of these goals.

A nexus between several factors has made the criminal justice system much harsher for defendants. Multiple charges on related and even unrelated crimes, often with harsh mandatory minimum sentences, can help secure a guilty plea on the original charge. The prosecution gets a conviction and avoids the cost of a trial, but the due process rights of the defendant are compromised in the process. Former Federal District Court Judge Kevin Sharp resigned from the bench because he could no longer tolerate the abuses done by mandatory minimum sentences. He offers a couple of examples:

“Antonio was driving down the street and, without being too graphic, he and his girlfriend were engaged in an activity that caused him to cross slightly over the double-yellow line. The police saw it and pulled him over. The police suspected his girlfriend was a prostitute, so they split Antonio and his girlfriend up and asked them questions. The police realized based on her answers that she in fact was Antonio’s girlfriend. Then, the police said, ‘OK, we are going to let you go. Oh, by the way, do you mind if we search your car?’ Antonio, forgetting that he had an unloaded pistol under the front seat of his car, responded, ‘No, go ahead.’ Antonio was charged with being a felon in possession of a firearm. Because he was convicted as an adult in his prior crimes, his mandatory minimum sentence was 15 years. …

Members of Congress, in their desire to be elected and reelected, often show how tough on crime they can be, and they say, ‘Look, mandatory minimums are necessary so that we can take discretion away from the judges.’ But these legislators have not taken away discretion, they have just moved it to the prosecutor, who has a dog in the hunt.“

The so-called “trial penalty” is the subject of a study on the disparate sentences offered in plea deals versus those likely to be imposed if the defendant goes to trial. This disparity is truly a threat to the Sixth Amendment right to a fair trial. Over 97% of federal criminal cases are now settled by plea, and again, rejecting a plea deal can carry considerable risk for a defendant. In fact, in discussing this study, Walter Pavlo puts things starkly: innocent people are pleading guilty. He quotes this finding:

“There is ample evidence that federal criminal defendants are being coerced to plead guilty because the penalty for exercising their constitutional rights is simply too high to risk.”

“How to make an innocent client plead guilty” is the topic of Jeffrey Stein’s confessional on the topic:

“... according to the National Registry of Exonerations, 15 percent of all exonerees — people convicted of crimes later proved to be innocent — originally pleaded guilty. That share rises to 49 percent for people exonerated of manslaughter and 66 percent for those exonerated of drug crimes.

You tell your client that they would probably win at trial, but if they lose, they will go to prison. The plea promises some meaningful benefit: getting out of jail sooner, avoiding deportation, not losing a job, seeing a daughter before her next birthday. But your client would have to accept responsibility for a crime they may not have committed.

The final stage happens in court. Your client has signed the paperwork admitting to something you believe in your gut they did not do. Maybe they acted in self-­defense. Maybe they were standing near the actual perpetrator and were presumed guilty by association because of the color of their skin. Maybe they were the victim of an honest misidentification.”

An episode in South Carolina indicating possible manipulation by prosecutors involved a grand jury, which is convened to hear preliminary evidence in a case and decide whether the defendant should be indicted on charges brought by the prosecution. This particular grand jury approved 904 indictments in a single day, averaging 39 seconds per indictment! In response, 27 defense attorneys filed a motion to have the indictments thrown out. It’s impossible to imagine that all of those cases received serious deliberation. Instead, the grand jury appears to have served as a rubber-stamp for the prosecution.

Over-criminalization is another major factor contributing to the erosion of due process rights. As Glenn Reynolds says, the next step should be fewer laws. This earlier paper by Reynolds made the point more forcefully: “Ham Sandwich Nation: Due Process When Everything Is a Crime” (free download):

“Overcriminalization has thus left us in a peculiar place: Though people suspected of a crime have extensive due process rights in dealing with the police, and people more charged with a crime have even more extensive due process rights in court, the actual decision whether or not to charge a person with a crime is almost completely unconstrained. Yet, because of overcharging and plea bargains, that decision is probably the single most important event in the chain of criminal procedure.

Reynolds offers a number of remedies, including replacement of absolute immunity for prosecutors with “qualified good-faith immunity”, pro-rata allocation of defense costs based on the ratio of convictions to the number of charges, and requiring that earlier plea offers be revealed to the jury at trial.

Today, the many laws we have against victimless behavior overburden the justice system. Have you ever: purchased a large soda? Used recreational drugs? Purchased raw milk? Engaged in oral sex? Played fantasy sports? Used a plastic straw? Vaped? Paid for a sex toy? Sold lemonade from a stand without a permit? Purchased a Happy Meal? Given food to a homeless person? These are just a few activities that are, or soon-to-be, illegal in certain jurisdictions, and I mentioned only one case having to do with licensure. I have not even mentioned crimes promulgated by federal regulators.

“Every law is violent. We try not to think about this, but we should.  On the first day of law school, I tell my Contracts students never to argue for invoking the power of law except in a cause for which they are willing to kill. They are suitably astonished, and often annoyed. But I point out that even a breach of contract requires a judicial remedy; and if the breacher will not pay damages, the sheriff will sequester his house and goods; and if he resists the forced sale of his property, the sheriff might have to shoot him.

This is by no means an argument against having laws. … It is an argument for a degree of humility as we choose which of the many things we may not like to make illegal. Behind every exercise of law stands the sheriff – or the SWAT team – or if necessary the National Guard. Is this an exaggeration? Ask the family of Eric Garner, who died as a result of a decision to crack down on the sale of untaxed cigarettes. That’s the crime for which he was being arrested. Yes, yes, the police were the proximate cause of his death, but the crackdown was a political decree.”

Yes, we need “a degree of humility as we choose which of the many things we may not like to make illegal.” We have over-crowded prisons and we have failed to protect the due process rights of the accused. A conviction should require proof of guilt beyond a reasonable doubt. In statistical terms, that would mean a very low p-value. Instead, our system has devolved into one in which defendants presumed innocent are forced to reckon with myriad risks, exaggerated by “kitchen sink” prosecutors and mandatory minimum sentences. The tradeoffs facing defendants are so unfavorable that few cases ever go to trial. The plea bargaining system often reduces the burden of proof to a matter of gamesmanship. For prosecutors, it’s like shooting fish in a barrel.