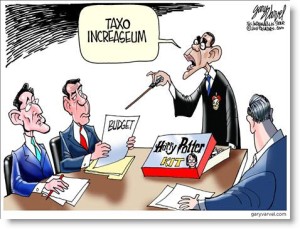 Predicting support among relatively affluent leftists for President Obama’s proposed elimination of the step-up in tax basis at death is probably a simple matter of knowing whether they have a surviving parent or whether they have a bequest motive of their own. Perhaps I’m too cynical: it probably depends on age as well (as that may influence awareness of the tax provision). Still, I’ll bet my predictions would be highly accurate for “affluent leftists of a certain age”.

A technical digression: the cost basis of an asset is the price originally paid. The tax basis is the same until the owner’s death. When the asset is ultimately sold, the gain over and above the tax basis is taxed at the capital gains tax rate, now 20% (plus a 3.8% Medicare surtax for incomes greater than $200,000). However, under current law, when an asset is held until death, an heir’s tax basis is “stepped-up” from cost to the asset’s value at that time. No income tax is owed at the time of the inheritance even if the asset is sold immediately. The estate tax still applies to the asset’s value (depending on the size of the estate and whether there is a surviving spouse), but there is no capital gains tax liability until an heir sells the asset at a price greater than the stepped-up tax basis.

Our rhetorically-inclined president calls this feature of the income tax code a “loophole,” despite the fact that it is a legal feature of our ridiculously-complicated income tax and that inherited assets are still subject to the estate tax.

Obama’s proposal would eliminate the stepped-up basis at death. The increase in value would be subject to the capital gains tax at the time of inheritance (even if the asset is not sold) and subject to the estate tax (40%) if the size of the estate exceeds a threshold (about $5.4 million per individual). In addition, the President wants to increase the capital gains tax rate to 24.2% (plus 3.8% yields the oft-quoted 28%). These points are generally unaffected by whether the asset is held in trust for the full benefit of the heir. There are some exemptions in Obama’s proposal to eliminate stepped-up tax basis for small, family-owned businesses and for gains on primary residences. Also, gains would be taxed only after the first $100,000 per individual and only at the time of the second death for a couple.

The double taxation of capital gains in large estates might not evoke much sympathy, but it would ultimately have negative consequences for the economy. It would bleed capital out of productive, employment-generating private investments to feed a resource-hungry Leviathan, notwithstanding Obama’s high-minded pretensions. Perhaps worse is the impact on smaller estates held by conscientious middle-class savers who have understood the magic of compound growth. The aggrieved children of many such savers would find themselves in the grips of a significant income tax liability, which might require a fire-sale of assets in order to make payments to the IRS.

Complex features like the stepped-up basis are not hallmarks of a well-designed tax system. They tend to be promulgated as a way of offsetting other features of the tax code that would otherwise be punitive. If anything, this web of features is an impediment to efficient revenue generation. A simple tax code would minimize compliance costs and eliminate the many provisions that distort economic decisions. But complexity lends itself to political manipulation, which is the subtext for President Obama’s failure to propose any sort off meaningful tax simplification. Instead, he proposes even more complexity to be administered by that most trusted of institutions: the IRS. Fortunately, the president’s tax package stands no chance of becoming law, but it is illustrative of his statist agenda and his economic ignorance.

This post at Reason critiques this and other aspects of the President’s tax plan. This note in Forbes gives more detail about the proposal but is just a bit too optimistic about its potential to benefit the middle class. For a variety of reasons, the middle class is unlikely to benefit in the long-run. Slower economic growth will take its toll, and the sad truth is that Obama is seeking to increase middle-class dependence on the state.