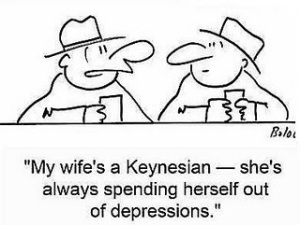 Economic aggregation is basic to traditional macroeconomic analysis, but it distorts and drastically oversimplifies the enormous number of transactions and the vast network of decision-makers that comprise almost any economic system, especially a market economy. There are some basic problems with aggregating across individuals and markets, but these are typically glossed over in macro-policy analyses. Instead, the focus is on a few key outcomes, such as aggregate spending by sector and saving, masquerading as collective “decisions” amenable to behavioral analysis. In this kind of framework, the government sector occupies an equal place to consumers and business investors. It is usually depicted as a great exogenous demander of goods and services, capable of “stabilizing” demand in the event of underconsumption, for example.

An insightful post by Gary Galles at the Mises blog drives home the inherent distortion involved in the analysis of macro-aggregates: “How Economic Aggregation Hides the Problems of Interventionism“.  The problems start with a nearly complete misapplication (if not neglect) of the basic problem of scarcity, as if that problem can be solved via manipulation of aggregate constructs. Galles offers a simple example of the macro distortion of “net taxes,” or aggregate taxes minus government transfer payments. Both taxes and transfers are complicated subjects, and both are subject to negative incentive effects. The net-tax aggregation is of little use, even if some rudimentary supply function is given treatment in a macro model.

By its very nature, aggregate government activity is distorted by the prices at which it is valued relative to market activity, and intervention in markets by government makes market aggregates less useful:

“For example, if government gives a person a 40 percent subsidy for purchasing a good, all we know is that the value of each unit to the buyer exceeded 60 percent of its price. There is no implication that such purchases are worth what was paid, including the subsidy. And in areas in which government produces or utilizes goods directly, as with defense spending, we know almost nothing about what it is worth. Citizens cannot refuse to finance whatever the government chooses to buy, on pain of prison, so no willing transaction reveals what such spending is worth to citizens. And centuries of evidence suggest government provided goods and services are often worth far less than they cost. But such spending is simply counted as worth what it cost in GDP accounts.”

Galles article emphasizes the unintended (and often unpleasant) consequences that are bound to flow from policies rationalized on the basis of aggregate macro variables, since they can tell us little about the impact on individual incentives and repercussions on the ability of markets to solve the problem of scarcity. In fact, the typical Keynesian macro perspective lends itself to slow and steady achievement of the goals of collectivists, but the process is destined to be perverse: more G stabilizes weak aggregate demand, or so the story goes, but as G expands, government entwines itself into the fabric of the economy, and it seldom shrinks. Taxes creep up, dependencies arise, regulation grows and non-productive cronies capture resources bestowed by their public sector enablers. At the same time, the politics of taxes almost ensures tat they grow more slowly that government spending, so that the government must borrow. This absorbs saving that would otherwise be available for productive, private investment. As investment languishes, so does growth in productivity. When economic malaise ultimately appears, we hear the same policy refrain: more G to stabilize aggregate demand! All the way down! Perhaps unemployed dependents are simpler to aggregate.

Aggregation masks the most basic issues in economics. A classic lesson in the complexity of creating even a simple product is told in “I, Pencil“, by Leonard Read. In it, he allows the pencil itself to tell the story of it’s own creation:

“Here is an astounding fact: Neither the worker in the oil field nor the chemist nor the digger of graphite or clay nor any who mans or makes the ships or trains or trucks nor the one who runs the machine that does the knurling on my bit of metal nor the president of the company performs his singular task because he wants me. Each one wants me less, perhaps, than does a child in the first grade. Indeed, there are some among this vast multitude who never saw a pencil nor would they know how to use one. Their motivation is other than me. Perhaps it is something like this: Each of these millions sees that he can thus exchange his tiny know-how for the goods and services he needs or wants. I may or may not be among these items.

There is a fact still more astounding: The absence of a master mind, of anyone dictating or forcibly directing these countless actions which bring me into being. No trace of such a person can be found. Instead, we find the Invisible Hand at work. This is the mystery to which I earlier referred. “

How many individual decisions and transactions are involved, throughout all intermediate and final stages of the process? How many calculations of marginal value and marginal cost are involved, and ultimately how many prices? While the consumer may think only of the simple pencil, it would be a mistake for a would-be “pencil czar” to confine their planning to final pencil transactions. But macro-analysts and policymakers go a giant leap further: they lump all final transactions together, from pencils to pineapples (to say nothing of the heroics involved in calculating “real values”, an issue mentioned by Galles). They essentially ignore the much larger set of decisions and activities that are precedents to the final transactions they aggregate.