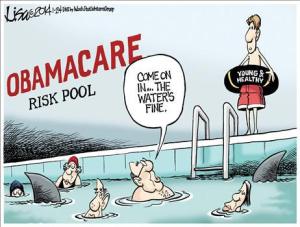 “… out in the real world, the bad news keeps coming, drop by drop, drip by drip, until we are seeing a virtual flood of Obamacare awfulness.“

That’s from Michael D. Tanner in “What’s Wrong With Obamacare?” Tonight, I offer  you a list of some of the drippings:

The “death spiral” might not be far-off for Obamacare. Here is Tanner’s assessment:

“The young and healthy simply haven’t signed up for Obamacare in the same numbers as those who are older and sicker. The only way for insurers to offset their skyrocketing [Medical Loss Ratios] is to hike premiums still further. … premiums in the worst states could have to rise by an average of 34 percent, and possibly as much as 52 percent. But premium hikes of that magnitude would almost certainly further discourage younger and healthier Americans from buying insurance.“

There is no question that Obamacare will have to be replaced or changed substantially.  Unfortunately, Obamacare apologists simply can’t come to grips with the reality of the law’s failure. They would do well to start focusing on new solutions to the problems that Obamacare was intended to solve. To that end, the Mercatus Center commissioned a collection of seven essays on how best to deal with the problem of pre-existing conditions, now published on the Mercatus web site. Market-based solutions are needed to encourage competition among insurers, incentivize innovation and cost control, and reestablish the primacy of the patient-provider relationship.