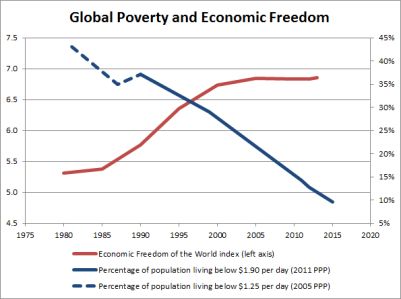 Should any form of equality be a central goal of society? Most certainly, but answers to this question often presume that government can set ground rules, ex ante, to ensure some form of ex post equality. Equality is a thing that can exist ex ante, as when rules are applied equally, and ex post, as when there are no differences in outcomes. The latter, however, always requires coercion and force of one form or another.

The great economist Deirdre McCloskey writes in the New York Times that forced equality will not save the poor; only growth can do it. Those who put their faith in the state to eliminate poverty lack an understanding of the underlying conditions and causes of the drastic improvements in the standard of living for even the world’s most impoverished inhabitants. It is all about economic freedom and capitalism. McCloskey explains:

“Eliminating poverty is obviously good. And, happily, it is already happening on a global scale. The World Bank reports that the basics of a dignified life are more available to the poorest among us than at any time in history, by a big margin. … Even in the rich countries, the poor are better off than they were in 1970, with better food and health care and, often, amenities like air-conditioning. …

… Free adults get what they need by working to make goods and services for other people, and then exchanging them voluntarily. They don’t get them by slicing up manna from Mother Nature in a zero-sum world. …

… We had better focus directly on the equality that we actually want and can achieve, which is equality of social dignity and equality before the law.“

Achievable equality has to do with ground rules, in the first instance. The rules must establish freedoms to which all participants are entitled. Many of these freedoms are enshrined in the U.S. Constitution, for example. With regard to strictly economic rules, we have: the right to private property, including the fruits of one’s own labor; the freedom to engage in exchange on terms of our choosing, and enter into contracts in pursuit of self-interest; and the freedom to take risks with real consequences.

Around the world, ex ante freedoms like these have been instrumental in lifting masses from the grips of poverty, not temporarily and artificially, but by encouraging self-sufficiency. That is the very ex post outcome that’s been so elusive for socialized economies and state-sponsored anti-poverty transfer schemes. By encouraging economic growth and an enhanced standard of living for those at the lowest end of the socioeconomic spectrum, ex ante freedoms achieve a crucial type of ex post equality: a life above penury.

McCloskey contrasts these kinds of equality with the utter failure of redistributive schemes to accomplish anything comparable:

“An all-wise central plan could force the right people into the right jobs. But such a solution, like much of the case for a compelled equality, is violent and magical. The magic has been tried, in Stalin’s Russia and Mao’s China. So has the violence.”

Not to mention the social and economic failures in Cuba, Venezuela, East Germany, Cambodia, Bulgaria, Ethiopia, Mozambique, Somalia, Romania, North Vietnam, North Korea, and too many others. And the sluggish growth to which many “social democracies” consign themselves by ceding dominance to the state. McCloskey continues:

As a matter of arithmetic, expropriating the rich to give to the poor does not uplift the poor very much. If we took every dime from the top 20 percent of the income distribution and gave it to the bottom 80 percent, the bottom folk would be only 25 percent better off. If we took only from the superrich, the bottom would get less than that. And redistribution works only once. You can’t expect the expropriated rich to show up for a second cutting. In a free society, they can move to Ireland or the Cayman Islands. And the wretched millionaires can hardly re-earn their millions next year if the state has taken most of the money.“

The following quote about poverty in the U.S. seems appropriate in this context. It is from Robert Sowell’s final column (having just announced his retirement from regular syndication):

“Most people living in officially defined poverty in the 21st century have things like cable television, microwave ovens and air-conditioning. Most Americans did not have such things, as late as the 1980s. People whom the intelligentsia continue to call the ‘have-nots’ today have things that the ‘haves’ did not have, just a generation ago.“

A sound argument can be made for the public provision of a safety net to cushion the blow of job losses in a market economy, or from the effects of catastrophic events on individuals or families. However, permanent status as a state-dependent must be discouraged for those capable of readjustment and self-reliance. Some such losses can and should be self-insured, not least by a willingness to pursue new opportunities, even those offering lower immediate rewards or requiring new training. Voluntary saving is another obvious form of self-insurance, of course. Nevertheless, few would deny the need for some form of social insurance to enable more comfortable transitions for those in need following certain kinds of losses.

McCloskey’s most powerful message involves the matter of value. Individuals trade with one another voluntarily only when it is of mutual benefit, which is dependent on the ex ante freedoms discussed above. There are mistakes in which parties are left unsatisfied by certain exchanges, but no one is compelled to repeat those mistakes. And they have every reason to innovate and seek alternatives. Participants may be happy to adjust the terms on which they are willing to trade, and they have every reason to imitate and repeat successes. These are the ways in which economic growth occurs:

“It is growth from exchange-tested betterment, not compelled or voluntary charity, that solves the problem of poverty.“