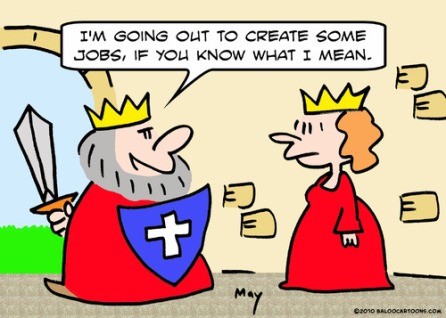 “… renewable energy advocates create the broadest possible definition of workers ‘supported’ by the solar power industry, falsely claim that the solar power industry ’employed’ all these workers, and then compare that to the narrowest possible definition of just a single segment of workers ‘directly’ employed in the ‘extraction’ component of the much larger natural gas industry.“

Taylor notes that, “In reality, renewable energy isn’t even in the same universe of job creation as conventional energy.” He goes on to cite the report on which these claims are based and picks it apart. The renewable energy job assertions are obviously self-intereseted, as rent seeking lobbyists know that the political class is dominated by easy marks for renewable energy wonder-stories.

Of course Taylor is correct that the claims about renewable energy jobs are false in the aggregate sense. However, it might or might not be true in the marginal sense, and that’s clearly the sense in which the claim is intended to be taken, despite the fact that the data used is not marginal in nature. If true, it’s not a selling point for renewable energy subsidies because “more jobs” represents a greater marginal cost.

And that brings us to an even more critical issue missed by Taylor: public policy should not be based on the objective of direct job creation. Jobs are a cost, not a benefit. We value the finished goods, not the inputs required to produce them. If you don’t quite get that, imagine two bids for the construction of new kitchen in your home. Same plans, same completion date, similarly brilliant customer reviews of the competing contractors. Without knowing the actual bids, if one contractor tells you it’s a three-man job and the other says it’s a four-man job, you’ll be pretty certain which bid you’ll want to accept.

Ah, but you say, that’s not a fair comparison, because I’m paying for it. Yes you are, just as taxpayers (and more generally society) must pay for the subsidies that lobbyists wheedle out of politicians. Or you say, Ah, but we want more renewable jobs because we want renewable energy, ’cause it’s just right. Maybe, maybe not, but if that’s so, then the idea that the cost is higher because more jobs are required per unit of energy is not a good rationale.

It’s often the case that public policy aimed at “creating jobs” is not accompanied by higher output, lower prices, or even… more jobs! For example, tariffs on foreign goods give an advantage to American producers, but at the cost of job losses in import industries and higher domestic prices that harm consumers more broadly, and thereby reduce jobs. When certain industries or firms are subsidized by the government, the taxpayer is harmed directly, not to mention suppliers of alternatives. This is true at the local and national levels: politicians love to talk about job creation when they offer incentives for new facilities or relocations to their jurisdictions, but these subsidies may put other local firms at a competitive disadvantage and leave taxpayers holding the bag for public services supplied to the recipient firm. When government undertakes large taxpayer-funded infrastructure projects, which might or might not boost productivity, the taxes are damaging and the projects are often poorly planned and lack effective cost controls. Jobs are not a reason to support such projects.

Similar points have been discussed in the past here on Sacred Cow Chips, with links to articles emphasizing the distinction between direct jobs created and economic welfare like this one. “Jobs” should never be a policy objective in and of itself. As Tim Worstall explains in a brief review of Mark Zuckerberg’s recent commencement address at Harvard, jobs simply are not the point! Policy must have a better rationale than the high cost of the labor input!