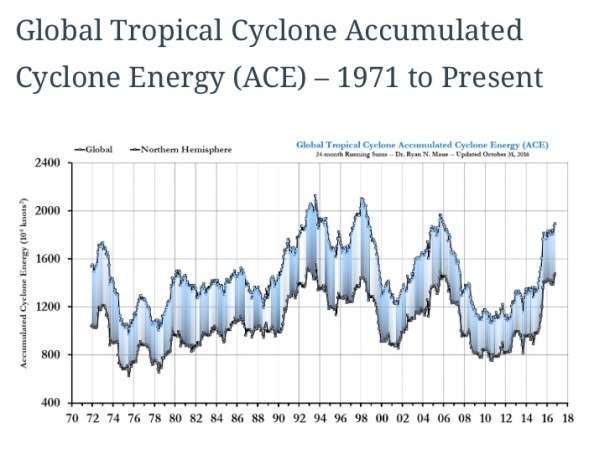 The nasty spate of hurricanes this year has been a catch-up of sorts following a decade of subdued activity. In fact, global hurricane activity has been flat to declining in frequency since 1970. Until the recent increase, hurricane activity had been trending down in terms of 24-month cumulative energy since the 1990s, as the chart above shows. The historical data on the number of U.S. landfalls extends back to 1900, and it has had a negative trend as well. Nevertheless, we hear from climate alarmists that Hurricanes Harvey and Irma, which ended a drought of record length in U.S hurricane landfalls, and now presumably Maria, were a consequence of anthropomorphic global warming (AGW), er… climate change.

The implication is that increases in the atmospheric concentration of CO2 led to these hurricanes or their high intensity. Apparently, the paucity of hurricane activity over the previous ten years can be waved off as a fluke. A further implication of the alarmist view is that the longer negative trends in hurricane frequency and energy can be ignored in the context of any relation to CO2 concentration. But how so? One confounding factor I’ve seen mentioned blames El Nino warming in the Pacific, and a consequent increase in Atlantic wind shear, for the long lull in activity after 2005. That has a ring of plausibility, but a closer look reveals that actual El Nino activity during those years was hardly impressive, with the exception of 2015-16.

More historical data can be seen in the charts on the tropical cyclone page on the Watts Up With That? blog. (The charts in question start about two-thirds of the way down the page.) Hurricane expert Ryan Maue compiled a number of these charts, including the one above. He authored an editorial in the Wall Street Journal this week bemoaning the climate-change hype surrounding Harvey and Irma (if the link doesn’t work, it is available at the WSJ’s Opinion page on Facebook, posted on 9/17). Maue believes that both the climate science community and the media share in the blame for that hype. But he also says the following:

“Although a clear scientific consensus has emerged over the past decade that climate change influences hurricanes in the long run, its effect upon any individual storm is unclear.“

Maue provides a link to this NOAA web site offering cautious support for the proposition that there is a link between global warming and hurricane intensity, though the data it cites ends about ten years ago, so it does not capture the recent lull. Also, some of the information it provides is based on modeled global temperatures and hurricane activity through 2100. As is well-known by now, or should be, long-term climate forecasts based on carbon forcings are notoriously inaccurate, and NOAA admits that the association between those predicted temperatures and future hurricanes is tenuous:

“It is premature to conclude that human activities–and particularly greenhouse gas emissions that cause global warming–have already had a detectable impact on Atlantic hurricane or global tropical cyclone activity.“

Perhaps the idea that there is consensus regarding the relationship between climate change and hurricanes is more of a stretch than Maue and NOAA let on. Here is a summary of 30 peer-reviewed studies showing no connection to either hurricane frequency or intensity. Most of these studies are more recent than the end of the data record cited by NOAA. And in fact, many of these studies find support for a negative link between global temperatures and hurricane activity.

One of the prominent alarmists in the climate research community is Penn State’s Michael Mann, who has famously claimed that hurricanes are more frequent now than at any time in the past 1,000 years. He based his conclusions on highly speculative hurricane “proxies” identified in layers of sediment. Mann’s claims and research technique have been called into questioned by other climate scientists, who have arrived at contrary results in their own research. Lest anyone forget, Mann was implicated in a  data manipulation fraud related to the East Anglia climate scandal. Though cleared by a group of tenured professors at his own university, there are a number of climate scientists who believe Mann violated scientific standards.

The claim that global warming will cause hurricanes to become increasingly intense relies on elevated sea surface temperatures. This year, temperatures in the Gulf of Mexico are elevated and are said to have had a role in strengthening Harvey as it approached the Gulf Coast. Texas, however, has experienced as many landfalls of major hurricanes with cooler Gulf waters as with warmer waters. And Irma strengthened in a part of the Atlantic without such warm temperatures. Instead, minimal wind shear was implicated as a factor contributing to Irma’s strength.

In general, Atlantic temperatures have been relatively warm since the late 1990s, a fact that most scientists would at least partially attribute to the “Atlantic multi-decadal oscillation“, a regular cycle in water temperatures that repeats with a period of multiple decades. Potentially adding to that temperature increase is a controversial change in NOAA’s calibration of sea surface temperatures, as an increasing share of those readings are taken from buoys rather than ship-board measurement. There is some suspicion that NOAA’s adjustments “cool the past” more than is justified, a suspicion that was heightened by allegations from one whistle-blowing NOAA scientist early this year. Then, there is the contention that the sea surface temperature makes little difference if it is matched by an increase in air temperature.

Overall, NOAA says the combination of frequency and intensity of tropical cyclones will increase by 2%-11% over the rest of this century. As Roy Spencer notes, that is not a terribly alarming figure given the risks people have always willingly accepted by living in coastal areas. In any case, the range is based on models of climate behavior that are of questionable reliability. And like past temperature predictions produced by carbon-forcing climate models, it is likely to be a gross overestimate. Here is Roger Pielke, Sr., who is quoted in this wide-ranging post on hurricanes and climate at the Fabius Maximus web site:

“Model projections of hurricane frequency and intensity are based on climate models. However, none have shown skill at predicting past (as hindcasts) variations in hurricane activity (or long term change in their behavior) over years, decades, and longer periods. Thus, their claim of how they will change in the future remains, at most, a hypothesis (i.e. speculation). When NOAA, IPCC and others communicate to the media and public, to be scientifically honest, they should mention this.”

Despite the spike in activity this year, strong hurricanes are intermittent and fairly rare. Establishing reliable statistical connections with other forces is difficult with emergent events like hurricanes. Moreover, the degree of error in measuring global or regional temperature itself is much larger than is generally acknowledged, and the global warming “signal” is very weak. As we say in the statistical analysis business, noisy data are compatible with diverse hypotheses. The relationship between hurricanes and climate change is a prime example.