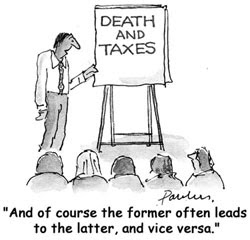 The GOP tax reform bill passed by the House of Representatives last week contains a reduced tax rate for “pass-through” business income. The discussion of this provision in my post of November 9 was accurate as far as it went, with one qualification: the highest marginal federal tax rate on pass-through profit income would be 25% under the bill, down from 39.6% currently. However, the bill contains complex rules for defining pass-through profit that qualifies for the lower rate, and my earlier treatment was woefully inadequate with regard to those rules.

The House bill seeks to address concerns that owners of personal-service businesses would be tempted to classify an “excessive” share of their income as profit rather than wages and salary. Profit would qualify for the new rate, but the wages and salary paid to the owner would not. Currently, all pass-through income is treated the same. Therefore, “safeguards” were inserted in the bill to prevent the presumed “abuse” that could occur under the bill (or see here or here). First, pass-throughs would be subject to a 70/30 rule: 70% of pass-through income would be treated as wage and salary payments; 30% would be treated as profit. That’s the simplest option. But it means that the true marginal rate on a dollar of income for an owner in the top bracket would be roughly 35.2% (0.7×39.6% + 0.3×25%). That’s much less favorable than my earlier post implied. It’s also less favorable than the corporate rate cut.

Alternatively, a business owner could use a schedule based on invested capital to determine a percentage of income qualifying for the 25% rate. This might benefit a physician invested in costly medical equipment, for example. However, other personal-service businesses are specifically assigned a percentage of zero. This list includes accountants, lawyers, financial advisors, and performers. Imagine that: the House approved a benefit for which lawyers cannot not qualify!!

Another important point is that many small businesses people do not earn enough to benefit from the 25% pass-through rate. Yes, they would see reductions in their marginal rates in lower brackets (and there would be fewer brackets), but in some cases the loss of deductions for items like state and local taxes would be more than offsetting. So it’s not clear how many pass-through business owners would actually benefit from the plan.

The Senate bill takes an entirely different approach. It reduces tax rates in lower brackets, but it would also allow pass-throughs to deduct a flat 17.4% from taxable income, effectively reducing the top marginal rate from 39.6% to 32.7%. Effective rates in all lower brackets would be reduced by the same percentage. There is no distinction in the Senate bill between wage and salary payments versus profits.

The post linked in the first paragraph left the impression that the House tax bill offered more relief for small businesses than the Senate bill, and that’s probably not true, at least for the most successful small businesses. However, the National Federation of Independent Business estimates that at least 85% of small business would not qualify for the 25% rate. Some businesses won’t qualify simply because they are too small to pay a rate exceeding 25%. And when a business qualifies, only 30% of its income will qualify for the reduced rate. Other pass-through businesses won’t qualify due to the nature of their services, another example of different tax treatment of different sources of income. The rules governing qualification for the 25% rate are distortionary and are hardly a simplification. The Senate bill, on the whole, probably does more for small business owners in lower brackets and probably many in higher brackets as well.