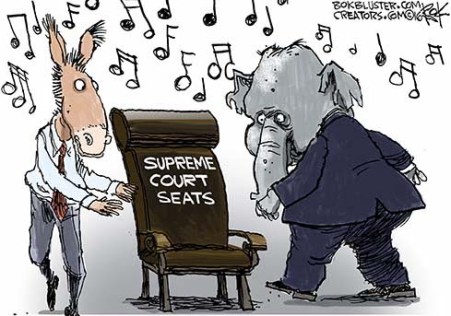 There are both great and hysterically negative expectations for Brett Kavanaugh’s seating on the Supreme Court, depending on one’s perspective. The changes are likely to be much less dramatic than many think, however, according to Glenn Reynolds in his Sunday column. As he says, most cases before the Supreme Court are decided by easy majorities, and that won’t change. On split decisions, Kavanaugh will be less of a “swing vote” than Anthony Kennedy, no doubt, and he will have influence over the choice of cases to be heard by the Court because the selection of a case requires only four justices.

Reynolds thinks Kavanaugh is not as conservative as partisans hope or fear. For example, Reynolds believes he is unlikely to vote to overturn Roe vs. Wade, when and if that question comes before the Court. There may be shifts on narrower questions, such as an earlier definition of fetal viability (in recognition of improved medical technology) and greater protection against arrangements that facilitate illegal funding of abortions by federal taxpayers. Reynolds acknowledges, however, that Kavanaugh is a stronger advocate of Second Amendment rights than Kennedy, so those protections are less likely to be eroded.

Reynolds’ also notes a shift that is likely to take place in legal academia:

“Strange new respect for judicial minimalism. As Harvard Law professor Adrian Vermeule remarked, ‘Law review editors: brace for a tidal wave of legal academic theories supporting judicial minimalism, Thayerianism, and strong — very strong — theories of precedent. Above all: the Court must do nothing without bipartisan agreement, otherwise it is illegitimate.’ The past half-century’s enthusiasm for judicial activism will vanish, as legal academia turns on a dime to promote theories that will constrain the court until a left-leaning majority returns, at which point they’ll turn on a dime again.”

That is all too likely. My liberal friends insist that the four justices on the left are free of political bias. Don’t laugh! I’ll be happy if Kavanaugh, as a justice, sticks to his traditional originalist philosophy on constitutional interpretation. I’m under no illusion that the left side of the bench takes the original meaning of the Constitution seriously.

My own concerns about Kavanaugh have to do with his earlier work in the Bush White House on issues related to national security, including work on the PATRIOT Act. In fairness, that work took place at a time when the horrors of 9/11 were still fresh in our minds. However, years later he wrote a favorable judicial opinion on metadata collection by the government. It’s disturbing that Kavanaugh has ever shown a willingness to relinquish the rights to privacy and due process as a routine matter of national security. The founders’ intent was to protect individual rights from the threat of tyranny, so they expressly limited the power of government through the Constitution. Those who would claim that threats to national security are so compelling as to supersede individual rights are perhaps the very tyrants the Constitution was meant to foil. Nevertheless, my hope is that Kavanaugh, having come face-to-face with those who would prefer to deny privacy and due process rights when it suits them, has gained additional respect for these protections.