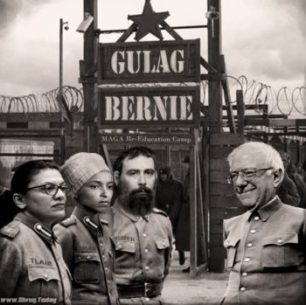 Some of Bernie Sanders’ most devoted fans have an unfortunate brutalitarian streak. The violent strain of so-called Bernie Bros aren’t as isolated as one might hope. First, of course, there was James Hodgkinson, the BB who attempted to assassinate Republican members of Congress at a congressional baseball game practice, seriously injuring Rep. Steve Scalise. Now, campaign field organizers for Sanders in Iowa and South Carolina have been captured on film proposing gulags, re-education camps, sentencing billionaires to hard labor, and shooting or beheading those opposed to Sanders’ policies. And much more. And they say this in all seriousness. What nice people have been assigned positions of responsibility within the Sanders campaign organization! Watch it for yourself at the link above.

Should we be surprised? No: these are advocates of forced collectivism, and if their favorable perspective on coercive power wasn’t enough of a tip-off, recent history suggests that many among them are truly ready and willing to do violence. The brutal and murderous history of collectivist regimes the world over demonstrates the tendency well enough. Stalin, Mao, Pol Pot, Castro and too many other leftist tyrants left bodies strewn in their wake as they sought to enforce their ideology. It’s no coincidence that the American Left holds the murderous Che Guevara in such high esteem. Black Lives Matter and Antifa have both perpetrated violent acts, and members of the Leftist media have openly advocated physical attacks on their political opponents. And then we have these Bernie Bros.

I feel compelled to review a bit of background on Bernie Sanders, the batty old communist who has managed to convince large numbers of poorly educated “intellectuals” that he knows the path to utopia. The nicer ones imagine that he’s a man of the people, though he hasn’t worked a day in his life at anything except agitation and rent seeking. He is an inveterate public mooch. His life history as a politician and as a person is rather unflattering.

I’ve used this Iowahawk (David Burge) quote about Sanders before:

“Who better to get America back to work than a guy who was actually fired from a Vermont hippie commune for being too lazy.”

Apparently, Barack Obama is not a Bernie Bro:

“Obama has told people in private that Sanders is both temperamentally and politically unfit to beat Trump in the 2020 general election, these people say. Among his concerns are Sanders’ strident form of politics and confrontational manners where he was known not to seek compromise during his long years in the US senate.”

And say what you will about Hillary Clinton, but her opinion of Sanders comports with much of what we know about The Bern:

“He was in Congress for years. He had one senator support him. Nobody likes him, nobody wants to work with him, he got nothing done.”

At least the Bernie Bros have taken their masks off before getting too far. Give Leftists power and they all will.