This is a quick post for Missouri readers. It’s well known that the coronavirus pandemic has differed in its severity across the world and across the country. I’ve been focusing on nationwide statistics, but I thought it would be interesting to look at my home state’s progress in getting ahead of the virus. The charts below are taken from the Covid Tracker from Microsoft/Bing.

The peak of new cases in Missouri appears to be behind us. The state reached a rough plateau around the beginning of April. There was some volatility in the daily numbers of conformed cases, but the a downward trend seemed to begin around the 10th. 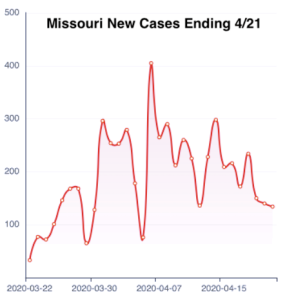 Cumulative confirmed cases in Missouri are shown in the next chart (Oops… spelling!), but in log scale. The slope of the line can be interpreted as the growth rate. It’s still positive and will be as long as there are new confirmed cases, but it is getting small. 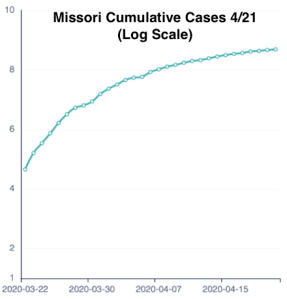 Daily Covid-19 fatalities in Missouri are shown next. They are obviously quite volatile from day-to-day, as might be expected. They seemed to reach a high about a week after new cases reached their plateau, which demonstrates the lag between diagnosis and death in the most severe cases. The trend has become more favorable over the past week, though another jump in deaths was reported today. 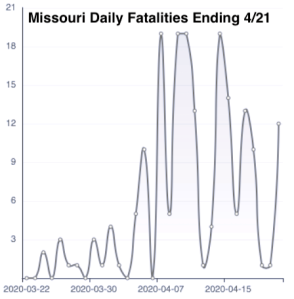 The following chart shows cumulative Missouri fatalities in log scale. The curve is flattening (growth rate slowing), but it might take a few weeks for fatalities to stay in the very low single digits day after day. 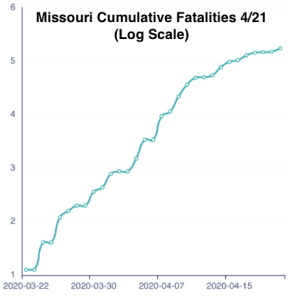 The St. Louis metro area has had the largest concentration of cases and fatalities in Missouri. St. Louis County, St. Louis City, and St. Charles County are ranked #1 – #3 in the state, respectively. Here are the top ten counties in terms of this grim statistic (I’m sorry for the poor alignment).

I wanted to take a closer look at the pattern of cases in the metro area over time. Last night I found daily county-level case data on my phone. I thought I’d be able to download it tonight, but the site has been uncooperative. Maybe later.

Missouri looks like it’s on the back end of the curve, at least for this wave of the pandemic. We can hope there won’t be a second wave, or if there is, that it will be more manageable.

2 thoughts on “A Look at Covid-19 Cases in Missouri”