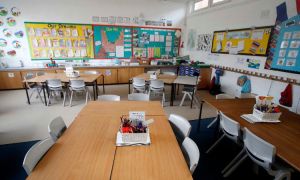 Many haven’t quite gathered it in, but our public education system is an ongoing disaster for many low-income and minority students and families. The pandemic, however, is creating a major upheaval in K-12 education that might well benefit those students in the end. But before I get into that, a quick word about National Public Radio (NPR): it doesn’t make its political leanings a secret, which is why it should not be supported by taxpayers. Yes, like many other mainstream media outlets, NPR serves as a political front organization for Democrats (and worse).

Last week, NPR did a segment on “learning pods”, which I’d describe as private adaptations to the failure of many public schools (and teachers’ unions) to do their job during the pandemic. Glenn Reynolds passed along an interpretation of that NPR segment from a friend on Facebook, which I quote in its entirety below (bold emphasis mine). It was either this segment or else NPR has taken it down … but that link more or less matches the description. The post is somewhat satiric, but it captures much of what was actually said:

Slightly editorialized (but true!) recollections below.

Host: In wealthy areas, parents get together and organize learning pods. What do we make of it?

School-System Man: Inequitable! Inappropriate! Bad! We do not support it!

Asian Woman Parent: Equity requires that we form these pods to educate our own children! Otherwise, only the rich can get education! Rich bad!

School-System Man: Rich horrible! They withdraw kids from public schools during the pandemic, so schools have less money!

Asian Woman Parent: We have no choice. You are not teaching.

Host: But what are you doing for the equity?

Asian Woman Parent: Why are the parents supposed to be doing something for the equity? That’s why we pay taxes, so professionals do something!

School-System Man: We cannot fix equity if you are clandestinely educating your own children, but not everyone else’s children!

Black Woman Activist: No, wait a minute. This sounds as though in a regular school year, black children get good education. And they are getting terrible education! Unacceptable!

Black Woman Activist: Foggeraboutit! It’s not Trump! It’s always been terrible! Black children are dumped into horrible public schools, where nobody is teaching them! So, my organization is now helping organize these learning pods for minority kids everywhere.

School-System Man [cautiously]: This is only helping Trump…

Black Woman Activist: Forget Trump! Don’t tell me black kids get no education because things are not normal now. When things were normal, their education was just as bad!

School-System Man: Whut??? How dare you! Our public schools are the best thing that ever happened to black children.

Black Woman Activist: That’s the point! You live in a rich suburb, and your kids get a great public school! Black kids don’t!

Asian Woman Parent: If Trump managed the pandemic properly, we would not be having this conversation.

Ah yes, so we’re back to blaming Donald Trump for following the advice of his medical experts, most prominently Dr. Anthony Fauci. And, while we’re at it, let’s blame Mr. Trump for following federalist principles by deferring to state and local governments to deal flexibly with the varying regional conditions of the pandemic, rather than ruling by federal executive edict. Of course, some of those state and local officials botched it, such as Andrew Cuomo. That’s tragic, but had Trump followed a more prescriptive tack, the howling from the Left would have been even more deafening.

We know that children are at little risk from the coronavirus. Nor do they seem to transmit the virus like older individuals, but teachers unions are adamant that the risks their members face at school would far exceed those shouldered by other “essential” workers. And the unions, not shy about partisanship even while representing public employees, want nothing more than to see Trump lose the election. So the unions and the schools districts they seem to control hold parents hostage. They collect their tax revenue and salaries while delivering virtual service at lower standards than usual, or no service at all. (Of course, public schools in some parts of the country are in session.)

The teachers’ unions and public schools might get their comeuppance. The situation represents a tremendous opportunity for private schools, home schooling, and innovative schooling paradigms. Many private schools are holding classes in-person, more parents are homeschooling, and alternative arrangements like learning pods have formed, many of which are quite cost-effective.

Pressure is building to allow education dollars to follow individual students, not simply to flow to specific government schools. You can buy a decent K-12 education for $12,000 a year or so, and it’s likely to be a better education than you’ll get in many public schools. (One of the panelists on the NPR segment smugly called this an “insidious temptation”). At long last, parents would be allowed real choice in educating their children, and at long last schools would be incentivized to compete for those students. That might be one of the best things to come out of the pandemic.