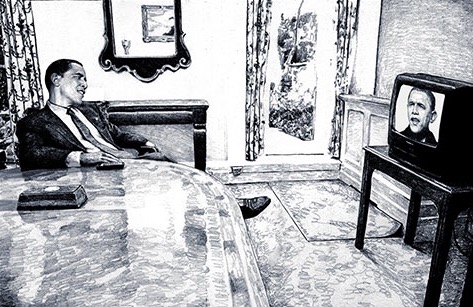 The durability of Barack Obama’s achievements as President of the United States will go down in history as … an oxymoron. He will likely be remembered more for his failures in social, economic, foreign policy and political leadership. Obama has himself to blame for the lack of a durable legacy. From the beginning of his administration, Obama’s mentality with respect to policymaking was always “my way or the highway” (“The election’s over, and I won”), and his consequent failure to achieve legislative victories during his last six years in office was always Congress’ fault. He would share no blame. But it was cool, ’cause Obama had “a pen and a phone” and was willing to act by executive fiat to affect changes he desired. His hope, I suppose, was that his regulatory diktats would become so ingrained in our way of life that rescinding them would be political suicide, much like some of the programs of the New Deal and the Great Society. Well, that backfired! Most of Obama’s executive actions can be undone by executive or legislative action, and while it won’t be costless, it will happen.

The fact of the matter is that Obama’s policies were not productive and not popular. Not only did they contribute to the election of Donald Trump, but they helped fuel the massive losses suffered by Democrats in state houses and governorships over the past eight years. But Obama was always right as rain.

The Planner’s Conceit: A big believer in the power and goodness of government, Obama attempted to usher in a great wave of new regulation and social planning. Here is David Harsanyi in Reason:

“The president’s central case for government’s existence rests on the notion of the state being society’s moral center, engine of prosperity and arbiter of fairness. Obama speaks of government as a theocrat might speak of church, and his fans return the favor by treating him like a pope.“

Obama is a man who lacks any understanding of the causes of prosperity: personal and economic freedoms, individual initiative, and healthy private markets. Jeffrey Tucker makes this point eloquently in “Why Obama Failed“:

“Despite his vast knowledge on seemingly everything, and endless amounts of charm to sell himself to the public, he missed the one crucial thing. He never understood wealth is not a given; it must be created through enterprise and innovation, trade and experimentation, by real people who need the freedom to try, unencumbered by a regulatory and confiscatory state. This doesn’t happen just because there is a nice and popular guy in the White House. It happens because the institutions are right.“

Obama’s results underscore his ignorance regarding the fundamental drivers of material well-being: economic growth during the post-recession years has been very sluggish, and while the unemployment rate has declined, it is not as impressive as it might appear: many workers have been forced into part-time jobs, and the decline in the jobless rate was exaggerated with declines in labor force participation to levels not seen since the late 1970s. Perhaps not coincidentally, the number of workers claiming Social Security disability benefits happened to soar as employment prospects remained grim. Slow growth in the economy and budget sequestration (an action Obama blames on republicans despite having proposed it himself as a cudgel) have reduced the annual budget deficit, but the nation’s outstanding debt under Obama has increased by $10 trillion, doubling the total outstanding over his eight years. Future annual deficits are projected to soar under his policies, according to the Congressional Budget Office.

Two factors that would contribute to ballooning deficits, if allowed to stand, are the Paris Climate Accord, signed by Obama without the Senate’s consent, and Obamacare. The climate treaty would do little to change global temperatures, but would impose heavy costs on the U.S. in terms of subsidies for foreign energy projects, regulatory burdens, and energy bills.

Failing Health Care: The future budget impact of the Paris Accord could be minor compared to Obama’s greatest source of pride: the Affordable Care Act (ACA), a.k.a. Obamacare. Recent scare stories have softened public opinion regarding the ACA, but so unpopular was this “landmark” legislation that Donald Trump was elected in part because he promised, along with congressional republicans (who played no part in its passage) to “repeal and replace” the law. The failures of the ACA were covered in my last post, “Death By Obamacare“.

Foreign FUBARs: The foreign policy foibles of the Obama Administration are legend. From Benghazi to the Syrian “red line”, from the botched deal on nuclear weapons development by Iran to the weak stand on Russian expansionism, American foreign policy has never been such an embarrassment. Obama, the recipient of a dubious Nobel Peace Prize, has been an avid drone warrior, collateral damage be damned. Our continued involvement in Afghanistan and the reentry of U.S. forces into Iraq must be sorely disappointing to the anti-war constituency Obama once courted. He has alienated our longstanding allies and cooed in the ears of avowed enemies. His grants of clemency in recent days to the likes of the treasonous Chelsea Manning and terrorists like Oscar Lopez Rivera are symbolic of the contempt in which he holds the lives lost at their hands. Our weakness abroad has led to a loss of respect for the U.S., signaled vividly by our exclusion from peace talks in Syria. Recent events have increased public awareness of our vulnerability to cyber-attack from foreign enemies, but Obama has failed to provide leadership on the issue.

Scandalous: Obama’s tenure as president has been marked by a number of scandals, contrary to what his admirers would have us believe. The Fast and Furious operation by ATF agents put guns in the hands of criminals and drug cartels, resulting in the death of a border control agent, but the Obama Justice Department sought to obstruct an investigation. The massacre at the U.S. consulate in Benghazi, Libya led to the death of four Americans, including Ambassador Chris Stephens. The White House and State Department sought to create a misleading story line, claiming an anti-Muslim video was responsible for a protest gone-wrong, when in fact they were well aware that it was a planned terrorist action. A deeper question is whether Stephens was in Benghazi attempting to arrange arms sales to “Syrian rebels”. Then there are the attempts by the IRS to target opposition to Obama, and conservative groups generally, and an apparent effort to conceal that activity, as well as cases in which it appeared that the administration was targeting members of the press whom they considered unfriendly. There were a number of other scandals and events such as the Solyndra subsidies, which suggested high corruption and cronyism. Here is an excellent discussion of a variety of dubious antics by the Obama Administration, and the shady efforts to keep them quiet.

Racial Muckraking: Ironically, Obama’s greatest failing might well have been the racial discord that boiled up during his two terms. As the first African-American president of the U.S., there was a considerable expectation that his legacy would be one of racial healing. Instead, it was as if he deliberately sought to encourage discord. Here is Joel Kotkin’s description of the president’s missteps on race relations:

“Whenever race-related issues came up — notably in the area of law enforcement — Obama and his Justice Department have tended to embrace the narrative that America remains hopelessly racist. As a result, he seemed to embrace groups like Black Lives Matter and, wherever possible, blame law enforcement, even as crime was soaring in many cities, particularly those with beleaguered African American communities.

Eight years after his election, more Americans now consider race relations to be getting worse, and we are more ethnically divided than in any time in recent history. As has been the case for several decades, African Americans’ economic equality has continued to slip, and is lower now than it was when Obama came into office in 2009, according to a 2016 Urban League study.“

The Liar: Obama is an unrepentant liar. Even the Washington Post felt it necessary to catalog some of the Obama lies that made it into their headlines (through many did not). There was the infamous Benghazi deception; the “Like Your Plan, Keep Your Plan” fib; he quoted enrollment numbers on the Obamacare exchanges that were greatly exaggerated; he publicly denied that domestic surveillance was a reality; he claimed that he was not responsible for our withdrawal from Iraq… what? There were efforts to cover and dissemble regarding details of all the scandals referenced above. By now, Obama’s insistence that his would be the “most transparent administration in history” is rather humorous. Most of Obama’s lies were motivated by ideology, and that might make it worse in my book. What’s particularly galling is the lie that Obama has any respect for the Constitution. He has attempted to subvert it with regularity.

I, Barack Obama: Another common trait among politicians is narcissism, but few are as obvious about it as Barack Obama. He has a habit of self-referencing that may be unequaled in political oratory. In fact, last July at the Democratic National Convention, he mentioned himself 119 times in a speech about Hillary Clinton. He is always eager to invoke his personal story as a possible source of inspiration for others. He is seemingly preoccupied with his legacy, going out his way to issue additional executive orders in the waning days of his term, and giving a “final” address in which he glorified his accomplishments. And then there was a final-final press conference at which he did the same. He has always encouraged the perception that Barack Obama is the “smartest guy in the room”. Of course, he is never wrong, and everything is cool. Obama seems to believe that he can make reality conform to his every assertion –oh yeah, I already talked about lies!

Did Obama’s narcissism contribute to his failed presidency? It’s plausible because he invested too much in his own ability to teach, influence others,  and control events. Collaboration with important stakeholders was unnecessary, and indeed, it was often better to demonize anyone who stood in the way of the world according to Barack. That world was a sad self-delusion.