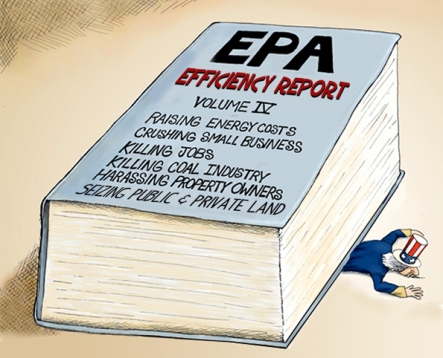 Green munchkins celebrated the fall of a house of cronyism earlier this month when it crashed right on top of EPA chief Scott Pruitt. Not that the Environmental Protection Agency has ever been free of cronyism and wicked warlocks, but Pruitt stumbled into an awkward appearance of coziness with industry representatives and was seemingly too fond of his expense account. The munchkins, however, will be sorely disappointed to learn that Andrew Wheeler, Pruitt’s replacement on at least an interim basis, will press forward with the same deregulatory agenda. They might imagine Wheeler as the surviving Warlock of the West, but the munchkins are incapable of understanding the deeper nature of wickedness at the EPA.

The agency took an expansive role during the Obama Administration (see this note on “environmental justice”, and this on the use of the “social cost of carbon” in rulemaking, and this on water regulation). Aggressive action was directed at emissions of carbon, a trace greenhouse gas (four parts per 10,000), but one that is necessary for life. In 2009, the EPA reached its “endangerment finding” that greenhouse gases, including carbon, pose a threat to humanity that must be addressed under the powers conferred upon the agency by the Clean Air Act. The Obama Administration viewed this finding as a regulatory carte blanche, ushering in a series of draconian, high-cost measures to reduce U.S. carbon emissions. Unfortunately, the environmental lobby is notorious for its inability to see beyond first-order effects. It cannot come to grips with the fact that green policies often waste more resources than they save, undermine the economy, infringe on liberty, and have their greatest negative impact on the poor.

President Obama also pushed for American participation in the Paris Climate Accord, which would have required transfers of billions of dollars of wealth to the often-corrupt governments of less developed countries for alternative energy projects. Beyond green energy objectives, this was presumably restitution for our past carbon sins. Whatever shortcomings Pruitt might have had, I valued his leadership in opposition to the Paris Accord and his role in dismantling the EPA’s overzealous regulatory model.

Pruitt might have earned praise from the green lobby in at least one area. He placed particular emphasis on streamlining Superfund site remediation, including a radioactive waste site in the St. Louis area. It is one of the so-called “top-10” sites that have been given high priority by the EPA. But there are 1,300 Superfund sites across the country, so Andrew Wheeler will have to be creative to succeed with more than just a few of these cleanups.

Ledyard King discusses the likely course of Scott Pruitt’s legacy under Wheeler, including continued opposition to the Paris Accord, reversing or deemphasizing renewable power mandates, reduced staffing and fewer enforcement actions. The Clean Power Plan is slated for replacement with rules that are not prohibitive to coal-fired power. Emissions from coal-burning are already heavily regulated, and CO2 and its unproven harms do not offer a valid pretext for a wholesale shutdown of the coal industry. Actions under the endangerment finding, if there are any, are likely to be more circumspect going forward. However, there are disconcerting reports that the Trump Administration may seek to subsidize or protect coal interests from more cost-effective alternatives, like natural gas.

According to King, Wheeler will continue Pruitt’s effort to balance representation on EPA advisory boards between academicians and business and state interests, include more geographic diversity on these boards, and end grant awards to members. Wheeler will continue to push for EPA rule-making based on fully-transparent science, rather than studies relying on private data. There are also likely to be efforts to stop “sue-and-settle” actions used by partisans to gain court-ordered consent decrees, which subvert public participation in the regulatory process.

The endangerment finding combined with the dubious and notoriously uncertain “social cost of carbon” gave EPA regulators almost unbridled power to control private activity. This ranged from questionable efficiency standards, uneconomic mandates on energy sources, and prohibitive emissions standards. The EPA also promulgated an expansive definition of “navigable waters” as an excuse to regulate virtually any puddle, or sometimes puddle, as wetland under the Clean Water Act. This overzealousness is a consequence of over-application of the precautionary principle, under which any prospective risk to humanity or the environment provides a rationale for regulation, taxation, or prohibition of an activity. It is also a consequence of refusing to recognize that government regulation, when it offers any benefit, has diminishing returns. The compliance costs of EPA regulations have been estimated to exceed $350 billion annually, a substantial impediment to economic growth that imposes cruel penalties on business, workers, and consumers. It is all the worse that these effects are strongly regressive in their impacts across income levels. Scott Pruitt may have been his own worst enemy, but his departure at this point might well advance the much-needed deregulatory agenda, as it is now that it is in the competent hands of Andrew Wheeler.