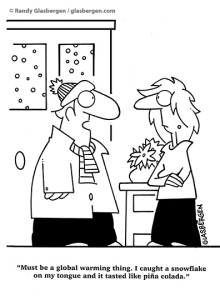 The heavily-manipulated global surface temperatures quoted by NOAA and NASA point to another “hottest month on record” in July, but the satellite temperature measurements do not agree. Nor do several other widely-followed global temperature series maintained elsewhere, such as the UK Meteorological Office (UK Met Office). I wrote about the manipulation of surface temperatures by NOAA and NASA in January in “Record Hot Baloney“, and in “Fitting Data To Models At NOAA” in June:

“If the facts don’t suit your agenda, change them! The 18-year “hiatus” in global warming, which has made a shambles of climate model predictions, is now said to have been based on “incorrect data”, according to researchers at National Oceanic and Atmospheric Administration (NOAA). Translation: they have created new data “adjustments” that tell a story more consistent with their preferred narrative, namely, that man-made carbon emissions are forcing global temperatures upward, more or less steadily.“

The last link provides detail on the nature of the manipulations. Perhaps surprisingly, rather large downward adjustments have been made to historical temperature data, reinforcing any upward trend in the late 20th century and hiding the current 18-year pause in that trend. Suffice it to say that the “adjustments” made by these agencies are at fairly detailed levels; some of the before-and-after comparisons shown by gifs at this link are rather astonishing. Some climate researchers have started to refer to the temperature series as “reconstructions” instead of “data”, out of respect for the legitimacy of actual data.

In the meantime, the “warmist” propaganda keeps flowing from NOAA and NASA, and it is hungrily swallowed and then regurgitated by media alarmists. The media love a good scare story. They are so complicit in reinforcing the warmist narrative they will ignore the revelation of a faulty temperature sensor at National Airport in Washington, D.C. (another hat tip to John Crawford). It has been recording temperatures averaging 1.7 degrees Fahrenheit too warm for the past 19 months. Now that the sensor has been changed, NOAA states that it will not make any adjustments to the past 19 months of recorded temperatures from the National weather station, despite the fact that they have routinely made many other changes, often without any real explanation.

Here is a recent opinion from Duke University Professor Robert Brown on the divergence of satellite and NASA/NOAA surface temperatures and the adjustments to the latter:

“The two data sets should not be diverging, period, unless everything we understand about atmospheric thermal dynamics is wrong. That is, I will add my “opinion” to Werner’s and point out that it is based on simple atmospheric physics taught in any relevant textbook. …

This does not mean that they cannot and are not systematically differing; it just means that the growing difference is strong evidence of bias in the computation of the surface record.“

Every new report issued by NOAA/NASA on record warm temperatures should be severely discounted. They are toiling in the service of a policy agenda; it will cost you dearly, and it will severely punish the less fortunate here and especially in less developed parts of the world; and it will reward the statist elite, bureaucrats and Green crony capitalists. Ronald Bailey in Reason recently weighed in on the consequences of this “apocalyptic anti-progress ideology“. Or read the wise words of Matt Ridley on “The recurrent problem of green scares that don’t live up to the hype“. Hey greens, relax! And don’t waste our resources and our well being on precautions against exaggerated risks.