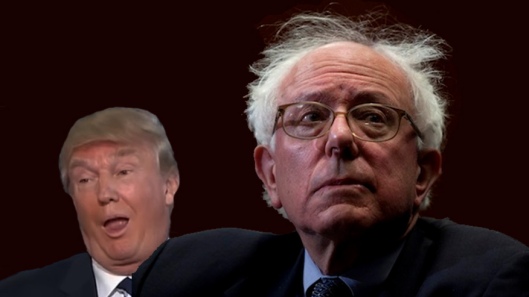 We have candidates vying for the nominations of both major U.S. political parties with tendencies toward nationalism: Bernie Sanders and Donald Trump. They both oppose liberalized immigration and they are both anti-trade, playing on economic fears in articulating their views. Sanders has attempted to soften his rhetoric on immigration since last summer, when he alleged that it harms U.S. workers.

There are differences between Sanders and Trump on the treatment of existing illegal immigrants. Despite Trump’s protests to the contrary, his nationalism has had ethnic overtones.

Trump’s positions on immigration and trade protectionism are not necessarily at odds with Republican tradition, which is a mixed bag, but they are consistent with a faith in big government and central planning. An anti-immigration and anti-trade platform is certainly no contradiction for Sanders, because central planning is integral to his avowed socialism.

Sanders has been called a “socialist with nationalistic tendencies”. He favors government provision of free health care and higher education, heavy redistribution, and severe restrictions on property rights via high taxation. Trump, on the other hand, has been called a “nationalist with socialist tendencies.” He too has called for nationalized health care, increasing certain transfer payments, as well as compromises to state rights. It would probably be more accurate to describe Trump as a corporatist, a system under which large business entities both serve and control government for their own benefit. For example, Trump has used and favors eminent domain to secure land for private projects, generous bankruptcy laws to eliminate business risks, and “deal-making” between government and private enterprise in order to “get things done.” Corporatism is a flavor of fascism, and it is perfectly consistent with a statist agenda.

Thus, each party has candidates who are by degrees both nationalist and socialist. In using these labels, however, I plead innocent to a violation of Godwin’s Law. Of course they are not Nazis, but they are nationalistic socialists. The distinction is explained nicely by B.K Marcus in The Freeman. Both candidates take positions that are consistent with the platform of the National Socialist German Workers Party, circa 1920.

As an aside, Marcus provides some fascinating etymology of the word “Nazi”, quoting Steve Horwitz:

“The standard butt of German jokes at the beginning of the twentieth century were stupid Bavarian peasants. And just as Irish jokes always involve a man called Paddy, so Bavarian jokes always involved a peasant called Nazi. That’s because Nazi was a shortening of the very common Bavarian name Ignatius. This meant that Hitler’s opponents had an open goal. He had a party filled with Bavarian hicks and the name of that party could be shortened to the standard joke name for hicks.“

“To this day, most of us happily go about believing that the Nazis called themselves Nazis, when, in fact, they would probably have beaten you up for saying the word.“

Back on point, I’ve written about both of these candidates before: Trump here and here; Sanders here. To keep things even, here is one more interesting take on Bernie.

“His family managed to send him to the University of Chicago. Despite a prestigious degree, however, Sanders failed to earn a living, even as an adult. It took him 40 years to collect his first steady paycheck — and it was a government check.”

It’s difficult for me to take these two candidates seriously because they do not take individual liberty seriously, nor do they understand the power of private markets to promote human welfare. I also have strong reservations about their understanding of constitutional principles, and I suspect that either would have few qualms about taking Mr. Obama’s cue in stretching executive authority.

Instead of the headline above, it would have been more accurate to say “Bernie, Donald and Ignoramus!” Unfortunately, one of these guys could be our next president. Well, it won’t be Sanders.