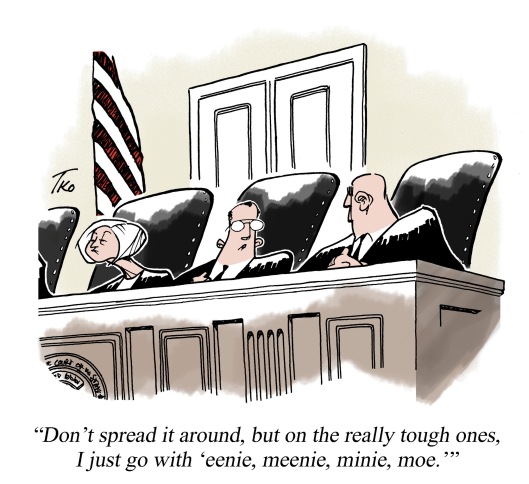 Supreme Court nominee Neil Gorsuch says the judicial branch should not be obliged to defer to government agencies within the executive branch in interpreting law. Gorsuch’s  opinion, however, is contrary to an established principle guiding courts since the 1984 Supreme Court ruling in Chevron USA vs. The Natural Resources Defense Council. In what is known as Chevron deference, courts apply a test of judgement as to whether the administrative agency’s interpretation of the law is “reasonable”, even if other “reasonable” interpretations are possible. This gets particularly thorny when the original legislation is ambiguous with respect to a certain point. Gorsuch believes the Chevron standard subverts the intent of Constitutional separation of powers and judicial authority, a point of great importance in an age of explosive growth in administrative rule-making at the federal level.

Ilya Somin offers a defense of Gorsuch’s position on Chevron deference, stating that it violates the text of the Constitution authorizing the judiciary to decide matters of legal dispute without ceding power to the executive branch. The agencies, for their part, seem to be adopting increasingly expansive views of their authority:

“Some scholars argue that in many situations, agencies are not so much interpreting law, but actually making it by issuing regulations that often have only a tenuous basis in congressional enactments. When that happens, Chevron deference allows the executive to usurp the power of Congress as well as that of the judiciary.”

Jonathan Adler quotes a recent decision by U.S. Appeals Court Judge Kent Jordan in which he expresses skepticism regarding the wisdom of Chevron deference:

Deference to agencies strengthens the executive branch not only in a particular dispute under judicial review; it tends to the permanent expansion of the administrative state. Even if some in Congress want to rein an agency in, doing so is very difficult because of judicial deference to agency action. Moreover, the Constitutional requirements of bicameralism and presentment (along with the President’s veto power), which were intended as a brake on the federal government, being ‘designed to protect the liberties of the people,’ are instead, because of Chevron, ‘veto gates’ that make any legislative effort to curtail agency overreach a daunting task.

In short, Chevron ‘permit[s] executive bureaucracies to swallow huge amounts of core judicial and legislative power and concentrate federal power in a way that seems more than a little difficult to square with the Constitution of the [F]ramers’ design.’

The unchecked expansion of administrative control is a real threat to the stability of our system of government, our liberty, and the health of our economic system. It imposes tremendous compliance costs on society and often violates individual property rights. Regulatory actions are often taken without performing a proper cost-benefit analysis, and the decisions of regulators may be challenged initially only within a separate judicial system in which courts are run by the agencies themselves! I covered this point in more detail one year ago in “Hamburger Nation: An Administrative Nightmare“, based on Philip Hamburger’s book “Is Administrative Law Unlawful?“.

Clyde Wayne Crews of the Competitive Enterprise Institute gives further perspective on the regulatory-state-gone-wild in “Mapping Washington’s Lawlessness: An Inventory of Regulatory Dark Matter“. He mentions some disturbing tendencies that may go beyond the implementation of legislative intent: agencies sometimes choose to wholly ignore some aspects of legislation; agencies tend to apply pressure on regulated entities on the basis of interpretations that stretch the meaning of such enabling legislation as may exist; and as if the exercise of extra-legislative power were not enough, administrative actions have a frequent tendency to subvert the price mechanism in private markets, disrupting the flow of accurate information about resource-scarcity and the operation of incentives that give markets their great advantages. All of these behaviors fit Crews’ description of “regulatory dark matter.”

Chevron deference represents an unforced surrender by the judicial branch to the exercise of power by the executive. As Judge Jordan notes in additional quotes provided by Adler at a link above, this does not deny the usefulness or importance of an agency’s specialized expertise. Nevertheless, the courts should not abdicate their role in reviewing an agency’s developmental evidence for any action, and the reasonability of an agency’s applications of evidence relative to alternative courses of action. Nor should the courts abdicate their role in ruling on the law itself. Judge Gorsuch is right: Chevron deference should be re-evaluated by the courts.

1 thought on “Courts and Their Administrative Masters”