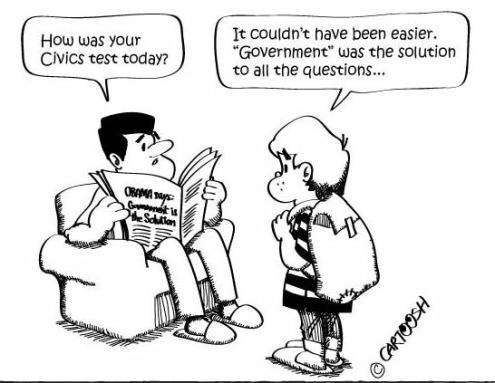 Building a big government is thought to be a luxury that prosperous nations can afford, but such efforts have a systematically negative effect on their ability to generate income, much as eating the seed corn delivers a farmer to poverty. Daniel J. Mitchell puts it bluntly in a piece entitled “Rich Nations That Enact Big Government Don’t Remain Rich“. This is nowhere more obvious than in Argentina and Venezuela, two nations that were prosperous 50 years ago and are now economically feeble, or in Venezuela’s case, imploding. Government, in the final analysis, extracts resources from the private economy, often contributing negatively to productivity. Yet the idea that government is a tonic for economic growth persists, and it persists even in the face of weakness induced by excessive government.

Government statistics on Gross Domestic Product (GDP) exaggerate the contribution of government to income in at least a couple of ways. To understand why, it’s necessary to distinguish between spending aggregates and income aggregates, which add up to the same total GDP. The former  include consumption, investment, and government spending. Income aggregates are the other side of the GDP “coin”: payments made to factors of production, which represent GDP as a measure of output value.

A dissociation between these alternative views of GDP with respect to government’s contribution is that government payments count as spending and income regardless of the recipient’s contribution to output. Even if nothing is accomplished, nothing is produced, it is measured as income and spending and it is an increment to GDP. Payments to dig holes and refill them contribute to GDP as long as the government does the “job”. By contrast, if a worker in the private sector is paid but produces nothing of value, the firm’s owners suffer a loss of income corresponding to the worker’s pay, and GDP is unchanged! So increased factor payments by government cause an implicit bias in the measurement of output.

A second government bias implicit in GDP statistics is that public spending and government labor payments are often not subjected to a “market test” of value. The activity is “mandated”, so there is no correspondence to a willingness to pay or real value. Public employee unions exaggerate these distortions. There are generally no competitors for government provision of services, few incentives for efficiency, and often little discipline in government procurement processes. So the pricing of government transactions tends to be inflated. And yet when the government gets ripped off by overcharges or cronyist kickbacks, the excess payments contribute positively to GDP. In contrast, when a private firm gets ripped off, its income is correspondingly reduced and the transaction generally will not contribute to GDP.

It takes taxes to fund government, either immediate or deferred, and the taxes are either explicit or implicit in the form of eroded purchasing power. This creates negative incentives that retard private investment incentives, work incentives, and thereby private economic growth. Redistributional efforts retard work incentives as well because welfare–state beneficiaries often face high marginal tax rates on earned income.

Does big government represent a good investment for the wealth of a prosperous nation? In view of the above, one can hardly trust official statistics in rendering a judgement on that question. But despite these distortions, big government and measured economic growth are still negatively correlated. Mitchell provides more detailed analysis of government and economic growth at Heritage, including a set of references to academic papers on the topic.

One important way that government may contribute to economic growth is through the provision of physical infrastructure, which theoretically improves efficiency in private production. However, public infrastructure spending is subject to the same upward cost pressures discussed above, it is often tied to bumbling industrial policy efforts, its utilization by the public is usually mis-priced, and governments are congenitally inept at operating facilities efficiently. It is not clear that private developers could be counted upon to fill the void without some form of partnership with government, however, which has its own pitfalls. There are certainly reforms that could make private and public infrastructure investment and operation more viable, such as eliminating regulatory roadblocks to the installation of new facilities.

Another area in which government may generate a positive economic return is public investment in education, but that return is far from guaranteed. The success of public education investment depends on a wide range of cultural, political, and economic factors. For example, Cuba has the third largest proportion of government education spending to GDP, but the country’s ability to profit from that investment is severely crimped by its totalitarian economic and political system. I have been a frequent critic of public education in general, and I am not persuaded that education is truly a public good, despite some degree of spillover benefit. And while education may be a worthwhile national priority in many circumstances, it is not clear that government should necessarily fund education, let alone “run” education. Public education spending certainly doesn’t automatically translate to effective education outcomes, and it does not guarantee economic growth.

There is great exaggeration regarding the success of certain nations that have allowed government to absorb a large share of resources. That includes many of the European states, for which average incomes are roughly comparable to the Mississippi Delta. Only Luxembourg, Norway and Switzerland have income levels that are respectable relative to the U.S., and Norway relies heavily on oil extraction. Attributing economic power to government in the Nordic countries is especially misleading because the strength of those economies has always stemmed from their fundamentally capitalist underpinnings. Sweden built its wealth on capitalism, but it has cannibalized that strength over several decades with a burgeoning welfare state and high taxes. It only recently has begun attempting to reverse course.

Economic progress is unlikely to be achieved by “investing” in a larger public sector. Instead, encouraging private activity via positive incentives and minimal regulatory interference is a better route to success. The measured economic benefits of government spending are illusory to a significant degree. Even those activities thought to be the most productive avenues for government involvement, like investment in infrastructure and education, are plagued by cost inflation and incompetent execution. Finally, cross-country empirical evidence confirms that a more dominant public sector is associated with lower income growth. And yet there will always be a faction subscribing to the infantile, “free-lunch” belief that big government can deliver growth, and deliver it in excess of the predictable damage it inflicts on the private economy.