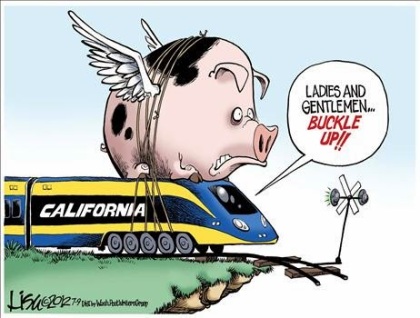 High-speed rail will remain a pipe-dream in the U.S. except for the development of a few limited routes. However, statists continue to push for large-scale adoption. That would represent a triumph of big government, if realized, and it is very appealing to the public imagination. But high-speed rail (HSR) is something of a fraud. Projected fares do not include the massive capital costs required to build it, which must be funded by taxpayers. Like most big public projects, HSR presents ample opportunities for graft by privileged insiders. And apparently it’s easy to rationalize HSR by repeating the questionable mantra that it is environmentally superior to autos or even air travel.

California recently confronted the harsh reality of HSR costs by scaling back its ambitious plans to a single line traversing a portion of the central valley. Now, the federal government has acknowledged that the state has violated the terms of past federal grants, essentially for non-performance. Those grants totaled $2.5 billion, and another grant of almost $1 billion might be withheld. Better not to throw good money after bad.

Megan McArdle wisely debunks the viability of HSR in the U.S. based on four potent factors: distance, wealth, legal obstacles, and cost. Unlike Europe, Japan and even the eastern Chinese seaboard, the distances involved in the U.S. make widespread development of HSR infrastructure quite challenging. Even on shorter routes, the U.S. has too much valuable property in and between population centers that would have to be repurposed for placement of relatively straight-line routes to facilitate high speeds. An authoritarian government can commandeer property, but wresting property from private owners in the U.S. is not straightforward, even when obtrusive bureaucrats attempt to invoke eminent domain. McArdle says:

“… the U.S. legal system offers citizens an unparalleled number of veto points at which they can attempt to block government projects. Any infrastructure project bigger than painting a schoolhouse thus has to either fight out the reviews and court cases for years, or buy off the opponents, or more likely, both.”

Another downside for HSR: the cost of installing and operating U.S. infrastructure is inflated by a number of factors, including high U.S. wage levels, unions, overlapping regulatory agencies, and the distances and other cost factors discussed earlier. Even worse, the extensive planning and lengthy time lines of such a project virtually assure cost overruns, as California has learned the hard way. So high-speed rail has a lot going against it.

Warren Meyer raises another issue: rail in the U.S. is dominated by freight, and it is very difficult for freight and passenger traffic to share the same system. That means freight traffic cannot be used to help defray the cost of installing HSR. Meyer makes an interesting comparison between the efficiency of passenger trains relative to freight: much more energy is needed to pull a heavy passenger train car than to pull the actual passengers inside. In contrast, the cargo inside a typical freight car weighs far more than the car itself. But the efficiency of freight transportation in the U.S. seems to have no allure for many critics of U.S. transportation policy.

“Freight is boring and un-sexy. Its not a government function in the US. So intellectuals tend to ignore it, even though it is the far more important, from and energy and environmental standpoint, portion of transport to put on the rails. … We have had huge revolutions in transportation over the last decades during the same period that European nations were sinking billions of dollars into pretty high-speed passenger rails systems for wealthy business travelers.”

Comparisons of efficiency across modes of passenger transportation are typically limited to operating costs, including energy costs, per passenger mile. That narrow focus yields a distorted view of the relative advantages of different passenger modes. In particular, the massive incremental capital costs of HSR are often ignored. Moreover, weight must be assigned to the very real economic costs of passenger time, not to mention the external costs imposed on the viability of farmland, nearby property owners, and wildlife.

Air travel has some obvious advantages over high-speed trains. First, it requires much less support infrastructure, and a significant base of that capital is already installed. Again, the massive, up-front infrastructure costs of HSR are incremental. Also, airports tend to be well-integrated with local transportation options. New passenger train terminals would require additional investment in local ground transportation such as light rail or subway extensions, highway access, and the like. In addition, planes require less passenger time than trains over lengthy routes.

How about autos vs. HSR? Autos have the pre-installed base of road infrastructure. They provide hard-to-value flexibility for the traveler as well, but parking costs must be dealt with, and cars have extremely high accident rates. Travel time is a disadvantage for autos relative to HSR, even at moderate distances. In terms of operating costs, however, autos are not necessarily at a disadvantage: they weigh much less per passenger than trains, but that advantage is offset by trains’ low “rolling resistance” and other factors. The best choice for travelers would vary with the value they place on their time, specific plans at the destination, preference for flexibility, and the operating costs of their vehicle relative to the high-speed train fare.

Supporters of HSR contend that it is less costly to the environment than other modes of transportation. That case is easier to make if you focus solely on operating costs and exclude the impact of generating the electricity needed to power trains, which will require emissions of greenhouse gases for many years to come. A second fundamental omission is the environmental cost of the rail infrastructure itself. It’s very existence is disruptive to local environments, but perhaps most importantly, producing and installing the steel, concrete, and other materials needed for HSR will carry a steep environmental cost.

HSR is unlikely to achieve widespread adoption in the U.S. The distances of many routes and high infrastructure costs are obstacles that will be nearly impossible to overcome. Projected fares would be outrageously high were they to cover the full cost of the infrastructure. A typical argument is that taxpayers should fund the infrastructure due to the social benefits that rail is presumed to confer, but that presumption is far-fetched given the impact of producing the infrastructure itself, as well as the power needed to run the trains. I don’t expect adherents of rail to put aside their dreams quickly, however: there is something so romantic about the notion of having the state provide a massive rail network that the idea will never die the death it deserves. And don’t be fooled by Elon Musk’s hyperloop. It remains a distant technological hope and it too will have enormous resource costs along with an attendant call for public subsidies (a call which has already begun). After all, public subsidies are a hallmark of most of Musk’s business ventures.