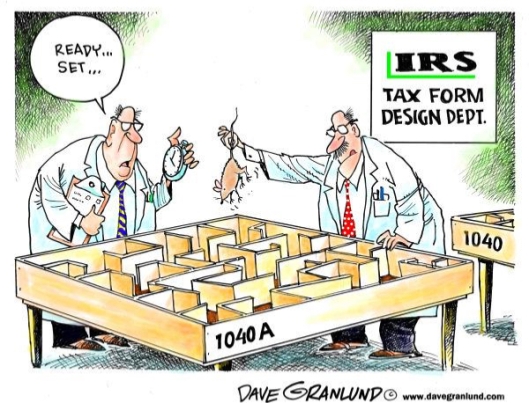 The Trump tax plan has some very good elements and several that I dislike strongly. For reference, this link includes the contents of an “interpretation” of the proposal from Goldman Sachs, based on the one-page summary presented by the Administration last week as well as insights that the investment bank might have gleaned from its connections within the administration. At the link, click on the chart for an excellent summary of the plan relative to current law and other proposals.

At the outset, I should state that most members of the media do not understand economics, tax burdens, or the dynamic effects of taxes on economic activity. First, they seem to forget that in the first instance, taxpayers do not serve at the pleasure of the government. It is their money! Second, Don Boudreaux’s recent note on the media’s “taxing” ignorance is instructive:

“In recent days I have … heard and read several media reports on Trump’s tax plan…. Nearly all of these reports are juvenile: changes in tax rates are evaluated by the media according to changes in the legal tax liabilities of various groups of people. For example, Trump’s proposal to cut the top federal personal income-tax rate from 39.6% to 35% is assessed only by its effect on high-income earners. Specifically, of course, it’s portrayed as a ‘gift’ to high-income earners.

… taxation is not simply a slicing up of an economic pie the size of which is independent of the details of the system of taxation. The core economic case for tax cuts is that they reduce the obstacles to creative and productive activities.“

Boudreaux ridicules those who reject this “supply-side” rationale, despite its fundamental and well-established nature. Thomas Sowell makes the distinction between tax rates and tax revenues, and provides some history on tax rate reductions and particularly “tax cuts for the rich“:

More than that, ‘the rich’ not only paid higher total tax revenues after the so-called ‘tax cuts for the rich,’ they also paid a higher percentage of all tax revenues afterwards. Data on this can be found in a number of places …“

In some cases, a proportion of the increased revenue may have been due to short-term incentives for asset sales in the wake of tax rate reductions. In general, however, Sowell’s point stands.

Kevin Williamson offers thoughts that could be construed as exactly the sort of thing about which Boudreaux is critical:

The first sentence of that quote highlights the obvious storyline pounced upon by simple-minded journalists, and it also emphasizes the failing political appeal of tax cuts when a decreasing share of the population actually pays taxes. After all, there is some participatory value in spreading the tax burden in a democracy. I believe Williamson is well aware of the second-order, dynamic consequences of tax cuts that spread benefits more broadly, but he is also troubled by the fact that significant spending cuts are not on the immediate agenda: the real resource cost of government will continue unabated. We cannot count on that from Trump, and that should not be a big surprise. Greater accumulation of debt is a certainty without meaningful future reductions in the growth rate of spending.

Here are my thoughts on the specific elements contained in the proposal, as non-specific as they might be:

What I dislike about the proposal:

Presumably, the Trump tax plan is to reduce the rate on “pass-through” income to just 15% at the individual level, regardless of other income. (It is not clear how that would effect brackets or the rate of taxation on other components of individual income.) Is that good? Yes, to the extent that lower tax rates allow individuals to keep more of their hard-earned income, and to the extent that such a change would help small businesses. S-corps have always had an advantage in avoiding double taxation, however, and this would not end the differential taxation of S and C income, which is distortionary. It might incent business owners to shift income away from salary payments to profit, however, which would increase the negative impact on tax revenue.

Shikha Dalmia wonders whether a real antidote for “Trumpism” might be embedded within the tax reform proposal. If the reforms are successful in stimulating non-inflationary economic growth, a “big if” on the first count, the popular preoccupations inspired by Trump with immigration policy, the “wall” and protectionism might just fade away. But don’t count on it. On the whole, I think the tax reform proposal has promise, though some of the good parts could vanish before a bill hits Trump’s desk, and some of the bad parts could get worse!