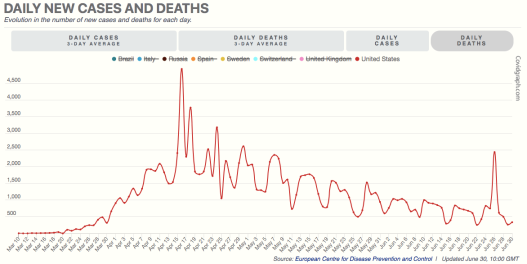 There’s been much speculation about whether recent increases in confirmed cases of COVID-19 (first chart above) will lead to a dramatic increase in fatalities (second chart). More generally, there is curiosity or perhaps hope as to whether the virus is not as dangerous to these new patients as it was early in the pandemic. I have discussed this point in several posts, most recently here. Based on the national data (above), we’re at the point at which an upturn in deaths might be expected. Based on the experience of many individual states, however, deaths should have trended upward by now, but they haven’t done so. Cases are generally less severe and are resolving more quickly.

Of course, more testing produces more cases (though there has been a mild uptick in test positivity over the past two weeks), but that doesn’t really explain the entire increase in cases over the past few weeks. In particular, why are so many new cases in the south? After all, there is evidence that the virus doesn’t survive well in warm, humid climates with more direct sunlight.

As I have mentioned several times, heavy use of air-conditioning in the south may have contributed to the increase. Nate Silver speculates that this is the case. The weather warmed up in late May and especially June, and many southerners retreated indoors where the air is cool, dry, and the virus thrives. Managers of public buildings should avoid blasting the AC, and you might do well to heed the same advice if you live with others in a busy household. In fact, nearly all transmission is likely occurring indoors, as has been the case throughout the pandemic. At the same time, however, with the early reopening of many southern states, younger people flocked to gyms, bars and other venues, largely abandoning any pretense of social distancing. So it’s possible that these effects have combined to produce the spike in new cases.

Some contend that the protests following George Floyd’s murder precipitated the jump in confirmed cases. Perhaps they played a role, but I’m somewhat skeptical. Yes, these could have become so-called super-spreader events; there are certain cities in which the jump in cases lagged the protests by a few weeks, such as Austin, Houston, and Miami, and where some cases were confirmed to be among those who protested. But if the protests contributed much to the jump, why hasn’t New York City seen a corresponding increase? Not only that, but the protests were outside, and the protests dissuaded many others from going out at all!

The trend in coronavirus fatalities remains more favorable, despite the increase in daily confirmed cases. One exception is New Jersey, which decided to reclassify 1,800 deaths as “probable” COVID deaths about six days ago. You can see the spike caused by that decision in the second chart above. Reclassifications like that arouse my suspicion, especially when federal hospital reimbursements are tied to COVID cases, and in view of this description from Bloomberg (my emphasis):

“… those whose negative test results were considered unreliable; who were linked to known outbreaks and showed symptoms; or whose death certificates strongly suggested a coronavirus link.”

Deaths necessarily lag new cases by anywhere from a few days to several weeks, depending on the stage at the time of diagnosis and delays in test results. The lag between diagnosis and death seems to center on about 12 – 14 days. Thus far, there doesn’t appear to be an upward shift in the trend of fatal cases, but the big updraft in cases nationally only started about two weeks ago. More on that below.

Importantly, a larger share of new cases is now among a younger age cohort, for whom the virus is much less threatening. The most vulnerable people are probably taking more precautions than early in the pandemic, and shocking as might seem, there is probably some buildup in immunity in the surviving nursing home population at this point. We are also better at treatment, and there is generally plenty of hospital capacity. And to the extent that the surge in new cases is concentrated in the south, fewer patients are likely to have Vitamin D deficiencies, which is increasingly mentioned as a contributor to the severity of coronavirus infections.

I decided to make some casual comparisons of new cases versus COVID deaths on a state-by-state basis, but I got a little carried away. Using the COVID Time Series web site, I started by checking some of the southern states with recent large increases in case counts. I ended up looking at 15 states in the south and west, and I added Missouri and Minnesota as well. I passed over a few others because their trends were basically flat. The 17 states all had upward trends in new cases over the past one to two months, or they had an increase in new cases more recently. However, only four of those states experienced any discernible increase in daily deaths over the corresponding time frames. These are Arizona, Arkansas, Tennessee, and Texas, and their increases are so modest they might be statistical noise.

Again, deaths tend to lag new cases by a couple of weeks, so the timing of the increase in case counts matters. Five of the states were trending upward beginning in May or even earlier, and 13 of the states saw an acceleration or a shift to an upward trend in new cases after Memorial Day, in late May or June. Of those 13, the changes in trend occurred between one and five weeks ago. Six states, including Texas, had a shift within the past two weeks. It’s probably too early to draw conclusions for those six states, but in general there is little to suggest that fatal cases will soar like they did early in the pandemic. Case fatality rates are likely to remain at much lower levels.

We’ll know much more within a week or two. It’s very encouraging that the upward trend in new cases hasn’t resulted in more deaths thus far, especially at the state level, as many states have had case counts drift upward for over a month. If it’s going to occur, it should be well underway within a week or so. Much also depends on whether new cases continue to climb in July, in which case we’ll be waiting in trepidation for whether more deaths transpire.