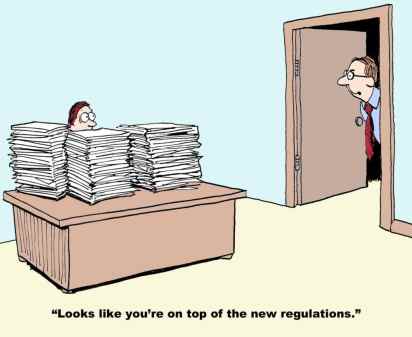 The stock market’s recent gains have at least three plausible explanations: corporate earnings growth, the prospect of tax reform, and deregulation. Tax reform and deregulation are stated priorities of the Trump Administration and have the potential to lift the economy and generate additional earnings. Investors obviously like that prospect, though regulation itself is a tool used subversively by crony capitalists to stifle competition in their markets. Conceivably, some of the large firms that dominate major stock indices could suffer from deregulation. And I have to wonder whether the economic threat of Trumpian trade protectionism is not taken seriously by the equity markets. Let’s hope they’re right.

It’s no mystery that high taxes and tax complexity can inhibit economic growth. Let’s face it: when it comes to productive effort, we can all think of better things to do than tax planning, crony capitalist or not. The same is true of regulation: the massive diversion of resources into non-productive compliance activities stifles innovation, growth, and even the stability of the status quo. Regulation creates obstacles to activities like new construction and the diffusion of telecommunications services. And it discourages the creation of new products and services like potentially life-saving drugs and slows their introduction to market. The sheer number of federal regulations is so spectacular that one wonders how anything productive ever gets done! Patrick McLaughlin of The Mercatus Center and several coauthors tell of “The Impossibility of Comprehending, or Even Reading, All Federal Regulations“.

Regulation is more than a mere economic burden. It is the product of an administrative apparatus that is not subject to the checks and balances that are at the very heart of our system of constitutional government. That is a threat to basic liberties. Barry Brownstein offers an instructive case study of “The Tyranny of Administrative Power” involving violations of property rights in New Hampshire. The case involves the administrative machinations surrounding an installation of high-power lines.

Governmental efforts to spur innovation ordinarily take the form of spending on research, subsidies for certain technologies or favored industries (e.g., alternative energy), and large government programs dedicated to the achievement of various technological goals (e.g., NASA, DARPA). Together with regulatory rules that influence the allocation of resources, these governmental efforts are called industrial policy. An unfortunate recent example is Trump’s decision to retain the renewable fuel standard (RFS), but on the whole, industrial policy does not seem central to Trump’s effort to stimulate innovation.

It’s clear that a deregulatory effort is well underway: the so-called “deconstruction of the administrative state” hailed by Steve Bannon not long after Trump took office. First came Trump’s 2-for 1 executive order (also see here) requiring the elimination (or modification) of two rules for every new rule. In the Wall Street Journal, Greg Ip writes about changes at the FDA and the FCC that could dramatically alter the pace of innovation in the pharmaceutical and telecom industries. (If the link is gated, you access the article on the WSJ’s Facebook page.) Speedier and less burdensome reviews of new drugs will greatly benefit consumers. An end to net neutrality rules will support greater investment in broadband infrastructure and access to innovative services. There is a new emphasis at the FCC on enabling innovative solutions to communications problems, such as Google’s effort to provide cell phone service in Puerto Rico by flying balloons over the island. The Trump Administration is also reining-in an aggressive EPA, the source of many questionable rules that weaken property rights and inhibit growth. (Again, the RFS is a disappointing exception.) Health care reform could offer much needed relief from overzealous insurance regulation and high compliance costs for physicians and other providers.

But deconstructing the administrative state is hard. Regulations just seem to metastasize, so deregulatory gains are offset by continued rule-making. This is partly from new legislation, but it is also a consequence of the incentives facing self-interested regulators. With that in mind, it’s impressive that regulation has not grown, on balance, thus far into Trump’s first year in office. According to Patrick McLaughlin, zero regulatory growth has been unusual going back at least to the Carter Administration. In quoting McLaughlin, The Weekly Standard says that Trump might well earn the mantle of “King of Deregulation“, but he has a long way to go. Brookings has this interactive tool to keep track of his deregulatory progress. One item on the Brookings list is the President’s intention to withdraw from the Paris Climate Accord. That represents a big save in terms of avoiding future regulatory burdens.

I can’t help but be wary of other avenues through which the Trump Administration might regulate activity and undermine economic growth. Chief among these is Trump’s negative attitude toward foreign trade. Government interference with our freedom to freely engage in transactions with the rest of the world is costly in terms of both foreign and domestic prices. With something of a history as a crony capitalist himself, Trump is not immune to pressure from private economic interests, as illustrated by his recent cow-tow to the ethanol lobby. Nevertheless, I’m mostly encouraged by the administration’s deregulatory efforts, and I hope they continue. The equity market apparently expects that to be the case.