Too many public health authorities remain in denial, but epidemiologists are increasingly convinced that heterogeneity implies a coronavirus herd immunity threshold (HIT) that is greatly reduced from traditional models and estimates. HIT is the share of the population that must be infected before the contagion begins to recede (and the transmission ratio R falls below one). Traditional models, based on three classes of individuals (Susceptibles, Infectives, and Recovered – SIR), predict a HIT of 60% or more. However, models that incorporate variation in susceptibility, transmissibility, and occupational or social behavior reduce the HIT substantially. Many of these more nuanced models show that the HIT could be in a range of just 15% to 25%. If that is the case, many regions are already there!

For background, I refer you to the first post I wrote about heterogeneity in late March, more detailed thoughts from early May, examples and more information on the literature later in May. I’ve referenced it repeatedly in other posts since then. And now, more than five months later, even the slow kids at the New York Times have noticed. The gist of it: if not everyone is equally susceptible, for example, a smaller share of the population needs to be “immunized via infection” to taper the spread of the virus.

Some supporting evidence appears in the charts below, courtesy of Kyle Lamb on Twitter. The first chart shows a seven-day average of C19 cases per million of population for ten states that reached an estimated 10% antibodies. These antibodies confer at least short-term immunity against C19. Most of these states saw cases/m climb at least through the day when the 10% level was reached, though Rhode Island appears to have been an exception. 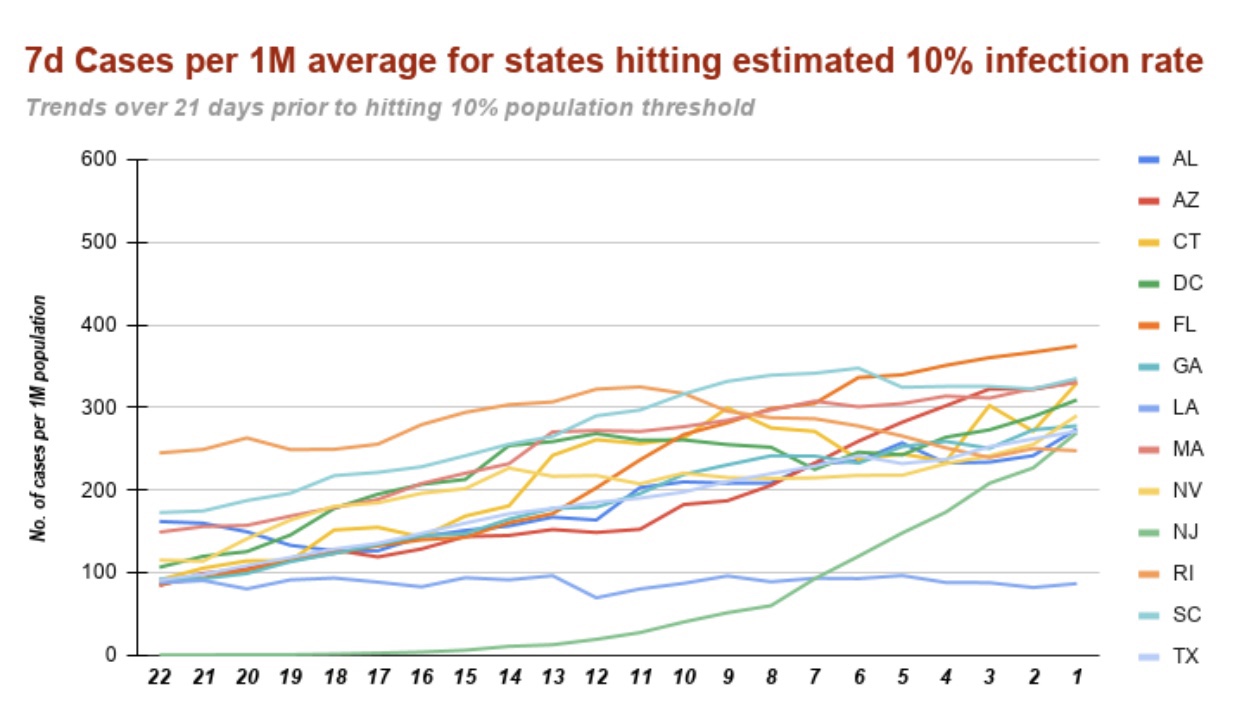 The second chart shows the seven-day average of cases/m in the same states starting seven days after the 10% immunity level was reached. I’d prefer to see the days in the interim as well, but the changes in trend are still noteworthy. All of these states except Louisiana had a downturn in the seven-day average of new cases within a few weeks of breaching the 10% infection level (Louisiana had distinct and non-coincident outbreaks in different parts of the state). These striking similarities suggest that things turned as the infection level reached 15% or more, consistent with many of the epidemiological models incorporating heterogeneity.

Next, take a look at the states in which C19 surged most severely this summer. The new cases are not moving averages, so the charts are not quite comparable to those above. However, the peaks seem to occur prior to the breach of the 15% infection level.

Speculation about early herd immunity has been going on for several months with respect to various countries and even more “micro” settings such as cruise ships and military vessels, where populations are completely isolated. Early on, this “early” herd immunity was discussed under the aegis of “immunological dark matter”, but we know now that T-cell immunity has played an important role. In any case, anti-body expression (or seroprevalence) at around 20% has been linked to reversals in C19 cases and deaths in several countries. As Yinon Weiss notes, New York City and Stockholm were both C19 hotspots in the spring, both have seen deaths decline to low levels, and they have little in common in terms of public health policy. London as well. The one thing they share are similar levels of seroprevalence.

An important qualification is that herd immunity is not relevant at high levels of aggregation. That is, herd immunity won’t be achieved simultaneously in all regions. The New York City metro area might have reached its HIT in April, but Florida (or perhaps only Miami) might have reached a HIT in July. Many areas of the Midwest probably still aren’t there.

In the absence of a new mutation of C19, the final proof of herd immunity in many of the former hotspots will be in the fall and winter. We should expect at least a few cases in those areas, but if there are more intense contagions, they should be confined to areas that have not yet seen a level of seroprevalence near 15%.