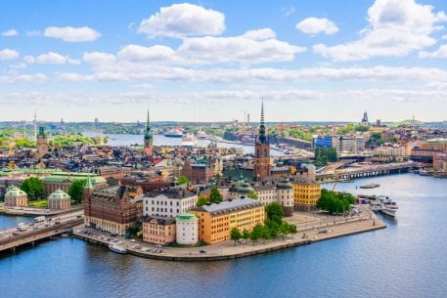 President Trump was in a festive mood last Friday, pleased with the May employment report, as he should be. But in his Rose Garden word jam, he made some questionable and unnecessary claims about coronavirus policies in the U.S. and the Swedish experience. I credit Trump for pushing to end the lockdowns as it became clear that they were both unhealthy and unsustainable. However, he’s now way too eager to cover his earlier tracks. That is, he is now defensive about the precautions he advocated on the advice of his medical experts in March and early April.

In the Rose Garden, Trump said that lockdowns were necessary to stop the spread of the virus. But to assert that lockdowns “stopped” or even slowed the spread of the virus is speculation at best, and they had deadly effects of their own. Most of the social distancing was achieved through voluntary action, as I have argued previously. Lockdown advocacy lacked any semblance of geographic nuance, as if uniform application makes sense regardless of population density.

Trump went on to say that Sweden was in “bad shape” because it did not impose a lockdown during the pandemic. This is not a new position for the president, but the facts are anything but clear-cut. Again, there is mixed evidence on whether mandatory lockdowns have a real impact on the spread or mortality of the coronavirus (also see here). That’s not to say that social distancing doesn’t work, but much of the benefit comes from private decisions to mitigate risk via distancing. Of course, that also depends on whether people have good information to act on. And to be fair, Sweden did take certain measures such as banning gatherings of more than 50 people, closing schools, and limiting incoming travel.

While the full tale has not been told, and Sweden’s death rate is high on a per capita basis, several other Western European countries that imposed lockdowns have had even higher death rates. The following chart is from the Institute for Health Metrics and Evaluation (IMHE). It is expressed in terms of coronavirus deaths per 100,000 of population. The orange line is Sweden, the purple line is Belgium, and the light blue line is the UK. Actuals are reported through June 4th. While Sweden’s death toll has a somewhat steeper gradient, the level remains well below both Belgium and the UK. It is also lower than the death rates for Italy and Spain, and it is about the same as France’s death rate. Yes, a number of other countries have lower death rates, including the U.S., but the evidence is hardly consistent with Trump’s characterization.

Sweden’s big mistake was not it’s decision to rely on voluntary social distancing, but in failing to adequately protect highly vulnerable populations. The country’s elderly skew older than most countries by several years. Residents of nursing homes have accounted for about half of Sweden’s coronavirus deaths, an international outlier. Inadequate preparedness in elder care has been a particular problem, including a lack of personal protective equipment for workers. There was also a poorly implemented volunteer program, intended to fill-out staffing needs, that appears to have aggravated transmission of the virus.

Sweden has also experienced a concentration of cases and deaths among its large immigrant population. It has the largest immigrant population among the Nordic countries, with large numbers of low income migrants from Syria, Iraq, Iran, Somalia and parts of Eastern Europe. Earlier in the pandemic, according to one estimate, 40% of coronavirus fatalities in Stockholm were in the Somali population. These immigrants tend to live in dense conditions, often in multigenerational households. Many residents with health problems tend to go untreated. Conditions like Vitamin D deficiency and high cholesterol, apparent risk factors for coronavirus severity, likely go untreated in these communities. In addition, language barriers and traditional trust relationships may diminish the effectiveness of communications from public health authorities. In fact, some say the style of Swedish public health messaging was too culturally idiosyncratic to be of much use to immigrants. And one more thing: immigrants are a disproportionately high 28% of nursing home staff in Sweden, implying an intimacy between two vulnerable populations that almost surely acts as a risk multiplier in both.

It might be too harsh to suggest that that Sweden could have prevented the outsized impact of the virus on immigrants. However, Sweden’s coronavirus testing has not been as intensive as other Nordic countries. More testing might have helped alleviate the spread of the virus in nursing homes and in immigrant communities. But the vulnerabilities of the immigrant population might be more a matter of inadequate health care than anything else, both on the demand and supply sides.

Contrary to Trump’s characterization, Sweden’s herd immunity strategy is not the reason for it’s relatively high death rate from the virus. Several countries that imposed lockdowns have had higher death rates. And Sweden’s death rate has been heavily concentrated among the aged in nursing homes and its large immigrant population. It’s possible that Sweden’s approach led to a cavalier attitude with respect identifying vulnerable groups and taking measures that could have protected them, including more intensive testing. Nevertheless, it’s inaccurate and unfair to scapegoat Sweden for not imposing a mandatory lockdown. The choice is not merely whether to impose lockdowns, but how to protect vulnerable populations at least cost. In that sense, general lockdowns are a poor choice.